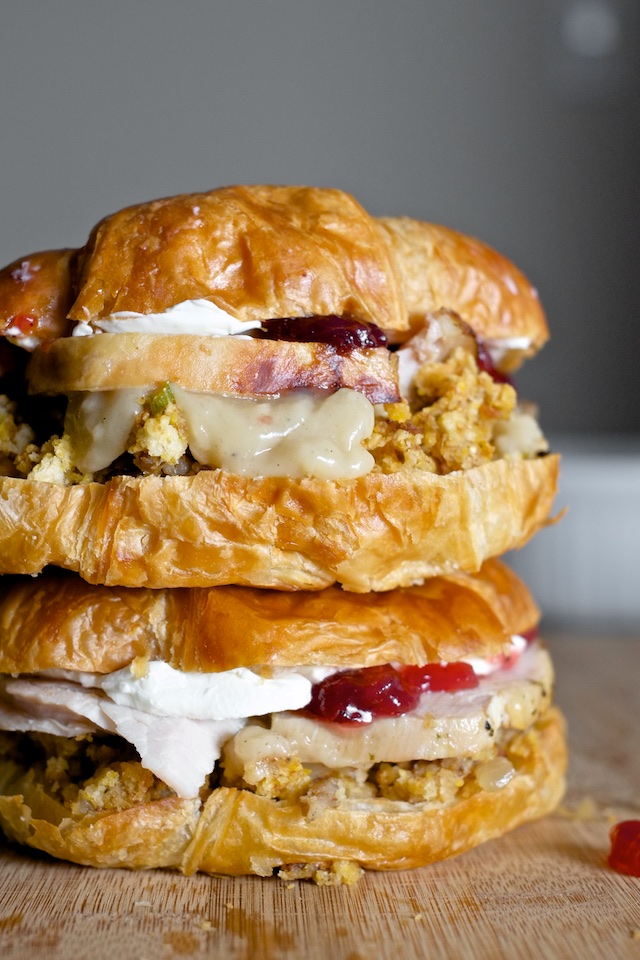 Thanksgiving is fun, but it’s kind of an overwhelming affair. One that requires organization and preparation and pushing carts through crowded aisles hunting for supplies. It’s work. I’m lucky enough to live near family and we are splitting up the various duties, but it’s still a lot.

That’s why the day after Thanksgiving is so fun. There is sooo much amazing food left in the fridge, nobody needs to cook. The work is done. Everyone can just wander to the kitchen, heap up a plate, and get back to vegetating, watching Christmas movies, or napping. But it’s also kind of fun to play with the food a bit, stacking up Thanksgiving frankenwiches with different flavor combinations. I got a jump on the experimentation and made four versions (in no particular order) for your consideration. You are welcome. 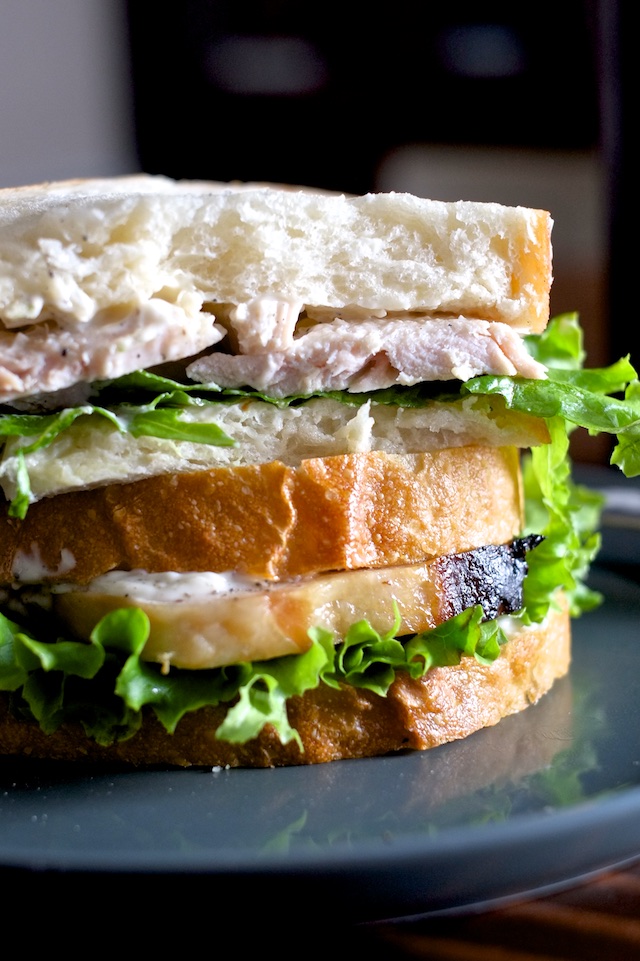 This is the sandwich I grew up making at 11:50pm on Thanksgiving, a good six or seven hours after the main event. It’s dead simple, and pretty much riding on nostalgia for me, but when the turkey is good, I like to let it shine with nothing but lettuce for crunch (iceberg if I’m at my grandparent’s house), lots of Hellman’s mayo, turkey, a pinch of salt, and a ton of fresh cracked pepper from my grandparent’s old wood pepper mill that grinds really unevenly. Some good soft bread, whole thing sawed in half at a sloppy diagonal with a butter knife and eaten standing at the kitchen counter. That’s it. But it really does taste good too, in a very straightforward kind of way.

Ingredients:
-soft sandwich bread
-leftover turkey
-lettuce, leaf or romaine or iceberg (or whatever)
-lots of Hellman’s mayo (or your preferred brand)
-a pinch of salt and lots of fresh cracked black pepper

Method:
1. Spread too much mayo on both slices of bread. Cover with cracked pepper.
2. Layer in fresh lettuce and turkey and a pinch of salt.
3. Eat standing at the counter, off a paper towel, or sitting in a chair while watching tv. 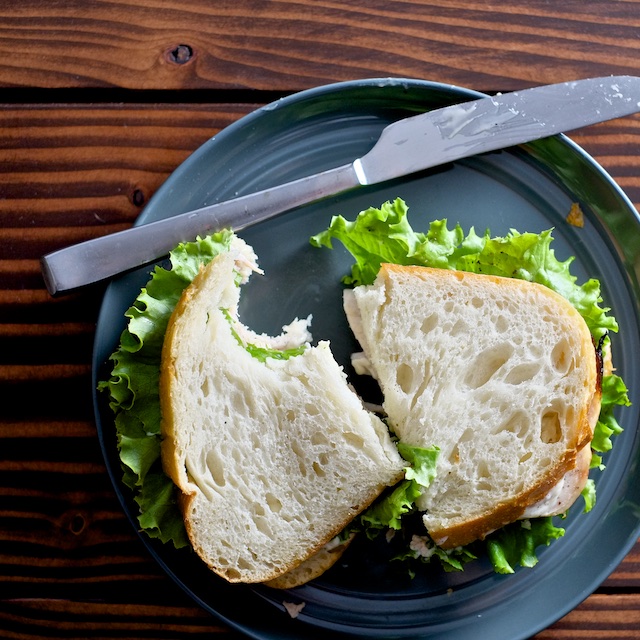 The idea for this sandwich was stolen from my friend Tiffany. Last year I posted an Instagram of my after-thanksgiving sandwich stack and she commented “we do that too, but with cream cheese and croissants” and I was like: “obviously, you’re right”.

This beast turned out to be my favorite flavor-wise. It has to be assembled thusly for optimal structural integrity: first split and toast a store bought croissant, then pile stuffing on the bottom half, followed by a dollop of gravy (I leave it cold because it stays together better, but if jiggle bothers you, by all means heat it up) then a slice or two of turkey, some cranberry sauce, and on the top half, cream cheese. Finagle the two sides together and it’s pretty hard to beat.

Method:
1. Split croissants in half with a bread knife and toast them.
2. On the bottom half layer stuffing (warm if you want), gravy (I go cold for this, but warm is good too), sliced turkey, and cranberry sauce.
3. On the top half spread cream cheese. This is a little tricky because the croissant is really delicate and the cream cheese requires a bit of brute force to spread around, so swipe it on in blobs if it’s cold and stubborn. I like it served with a couple of clementines. 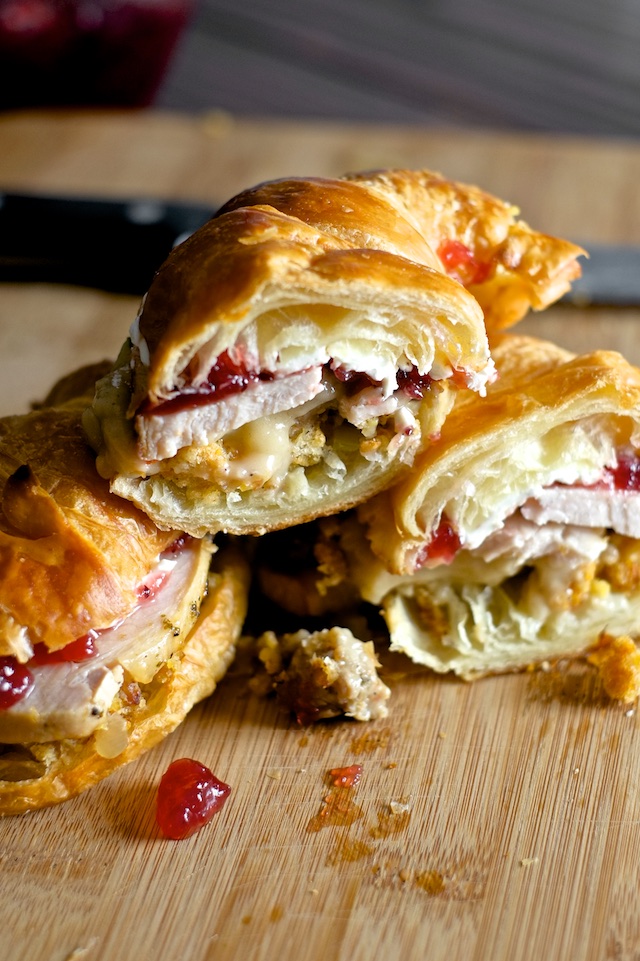 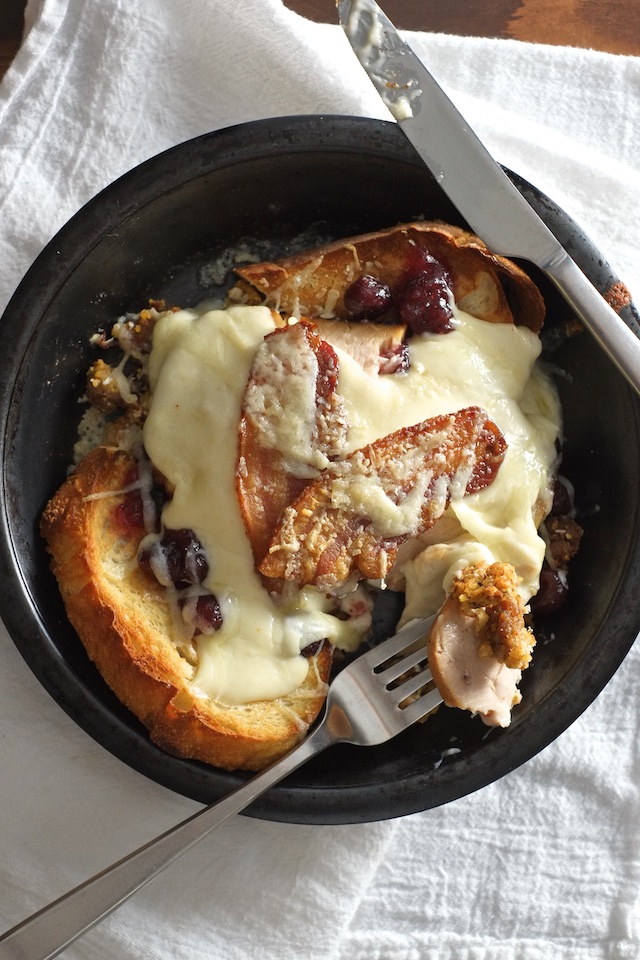 I hear that Kentucky has this crazy sandwich called a Hot Brown. I can’t say I’ve ever had a proper one, but it’s an open-faced thing with toast on the bottom, turkey, tomatoes, cheese sauce, and bacon. So I didn’t really need to go to Kentucky to know it’s for me.

This Thanksgiving version is built similarly on a bed of toast and stuffing, a layer of sliced turkey, cranberry sauce instead of tomatoes, a blanket of gruyere cheese sauce, and bacon. It works. But to be honest, anything with a blanket of gruyere cheese sauce is going to taste good. If you’re up for making a little bechamel and bacon the day after, Thanksgiving Hot Browns could be in your future.

Ingredients:
-white bread
-leftover stuffing
-leftover turkey
-leftover cranberry sauce
-bacon
-one recipe bechamél sauce with a cup of shredded gruyere cheese to melt into every cup of sauce (plus a small handful of shredded gruyere set aside for topping)
-salt and pepper (I like white pepper for white sauces, but black is delicious)
-optional: pinch of nutmeg (for the cheese sauce)

Method:
1. Start your bacon. Cook it in the oven using this method because it’s the best.
2. Make your bechamél sauce using this method. Remove it from the heat and stir in your shredded gruyere until melted and smooth. Season sauce with salt and pepper to taste. Add a pinch of nutmeg if you’re using it.
3. Toast up your bread and slice it in halves or quarters. Place it in an oven safe dish like a pie pan. Warm up your stuffing and turkey and add a pile of each to the toasted bread (stuffing on the bottom, turkey on top).
4. Dot the toast, stuffing, and turkey with cranberry sauce.
5. Flood the entire mess with as much cheese sauce as you like. Top with a few strips of crispy cooked bacon and a sprinkle of shredded gruyere.
6. Broil the sandwich until the cheese on top is melted and bubbly. Set the pie pan on a plate or towel (because it will be hot) and eat it with a fork and knife. 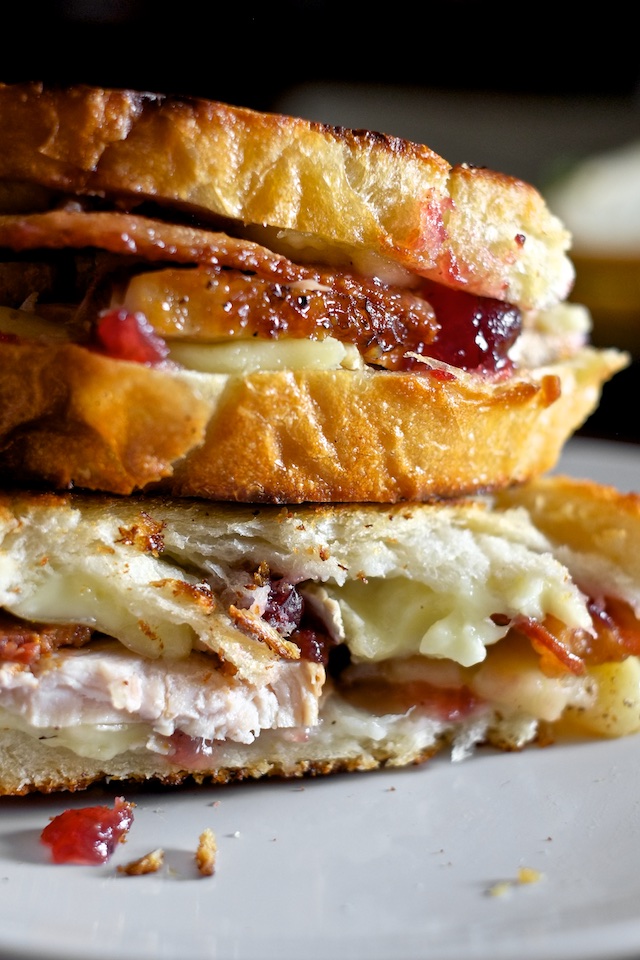 Brie and sweet cranberries are just made for each other. Add a little bacon to balance out the sweetness, nestle some turkey in the middle and it’s pretty excellent. This sandwich was my favorite texture-wise because the crunch of properly butter drenched and slowly toasted bread is undeniable.

Ingredients:
– a fancy white loaf of bread (with some good air holes in that crumb structure for enhanced textural awesomeness)
-butter (like a tablespoon per sandwich)
-brie (maybe three slices per side of the sandwich, more is good too, less is fine if you’re not sure how you feel about brie)
-leftover turkey
-leftover cranberry sauce
-bacon

Method:
1. Make bacon like this.
2. Slice your bread about 1/2 inch thick. Butter one side of each slice (the sides that will be the outside of the sandwich)
3. Assemble your sandwich with three slices of brie on each slice of bread, turkey on one side, cranberry on the other side, and bacon in the middle.
4. Toast your sandwich in a pan (buttered sides out) over low to medium-low heat until the cheese is melty, the sandwich is warmed through, and the bread is gorgeously brown.
5. Eat it while it’s hot. 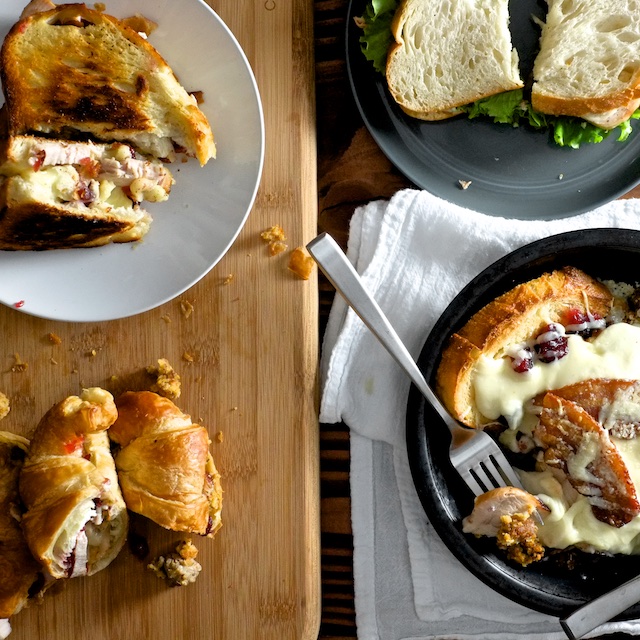 All these sandwiches are delicious and I love them like children, but last night I combined the filling from the croissant sandwich with the buttery toasted bread from the grilled cheese and we are getting married.