Cody and I went on a road trip to see my grandparents in Tallahassee at the beginning of April. It was great. As you can probably surmise, I made the trip as much about food as possible, yet still managed to miss half of the food-related photo-ops there were. Anyway… 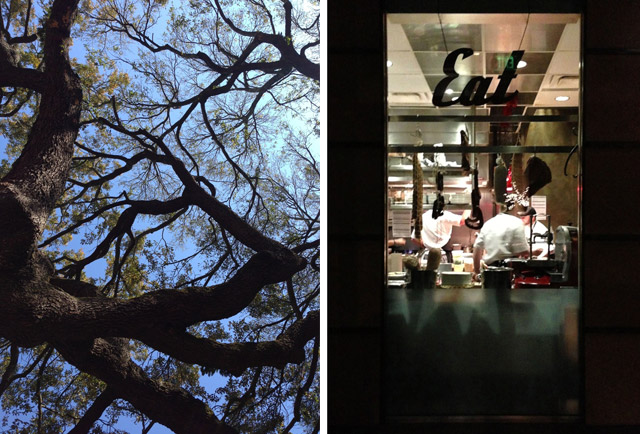 We stayed overnight in Atlanta and after watching the Atlanta episode of The Layover I had one thing on my mind: a double cheeseburger from Holeman & Finch. Everything at Holeman & Finch is made in house. Their menu is mostly small plates made for sharing and they specialize in charcuterie and delicious though infrequently-eaten animal parts. They also make cheeseburgers, and they are very special cheeseburgers. The kitchen turns out exactly twenty-four burgers per day, from baking the buns to grinding the meat to making the ketchup and pickling the pickles. The burgers are served every night at 10:00 pm on the dot.

The restaurant doesn’t take reservations and you can’t pre-order a burger, it’s entirely first come, first served. We rolled up at 8:30 on a Tuesday evening and the restaurant was packed, PROBABLY because it had been featured on The Layover, and the burgers were all spoken for. When we asked the server what time we would have had to get there to get a burger and she said “probably 8:00”. So there are people squatting at their tables from 8:00 (or earlier) to 10:00, ordering snacks and drinks and waiting waiting waiting. Not a bad problem to have if you’re a restaurant, but not a nice problem to have if you are me.

But that’s what I get for being Anthony Bourdain’s little sheep-woman. No, what I actually got was the most incredible chicken liver pate of my life, a delicious tri-tip in bourbon sauce, one bountiful and inventive variety box of freshly baked bread, and a fried apple pie a la mode. So I will continue to bleat and follow and bleat and eat, wherever Bourdain leads.

The next morning we stopped for a modest (ha!) portion of french toast before heading to the World of Coca-Cola to drink sodas from other countries. My favorite was the bitter lemon soda from England. It wasn’t bitter, just extra tart. The worst was something called Spar-berry from Africa, which tasted like strep throat. 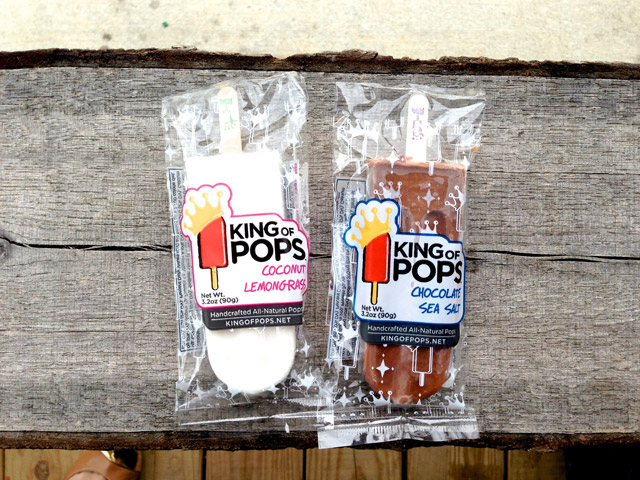 Then we stopped in Serenbe to gawk at the pretty houses and try a pop from king of pops. Thumbs up for those pops.

My goal in going to Tallahassee was to introduce Cody to some of the south and visit my grandparents. I expected the town itself to be pretty snooze-worthy, but it was downright dreamy and so so cute. It was overcast most of the time we were there, but the light made the moss on all the trees look extra romantic. 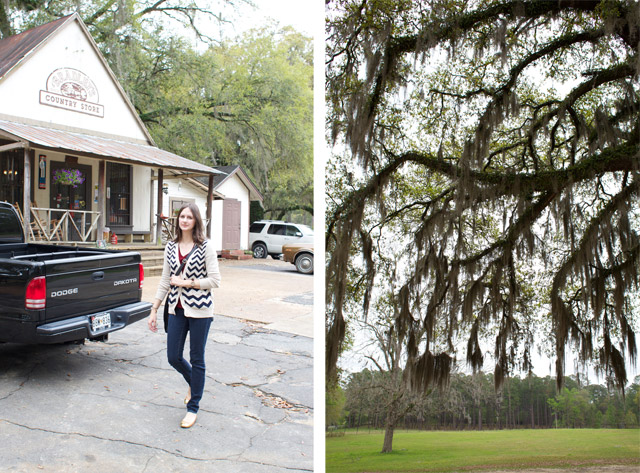 One of our first stops was to a little place called Bradley’s Country Store which is the country-est back-woodsy-est little shop I’ve ever set foot in. That’s me in front of it, looking super happy about having my photo taken. Anyway, their specialty is sausage and, when we pulled up in the parking lot, three southern dudes on a lunch break tumbled out of an old, wheezy truck in grease-stained shirts and baseball caps and probably thirty teeth among the lot of them and called my grandmother ma’am and that’s when I knew that this place was real, and that the sausage would be good. And it was. 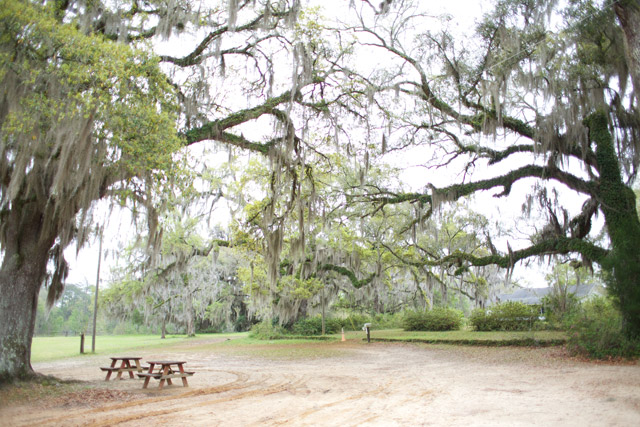 Those picnic benches are right outside of Bradley’s for southern dudes and ladies to sit at and enjoy a sausagey lunch. We took ours home raw, to be fried up later and made into red beans one day, breakfast another. 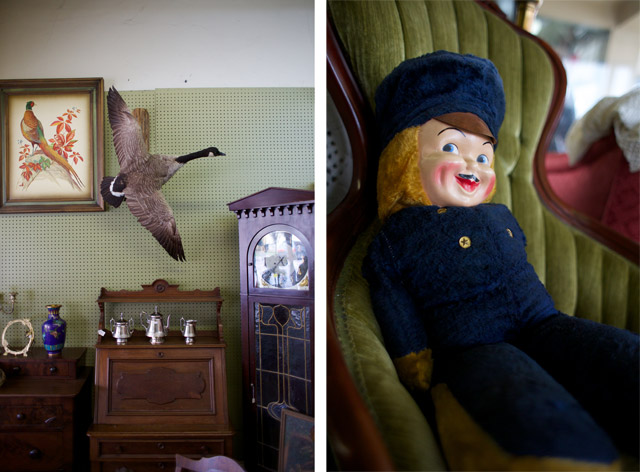 Then we toured around little Thomasville Georgia which is only about thirty minutes from Tallahassee and  found some fun antiques and creepy old dolls. 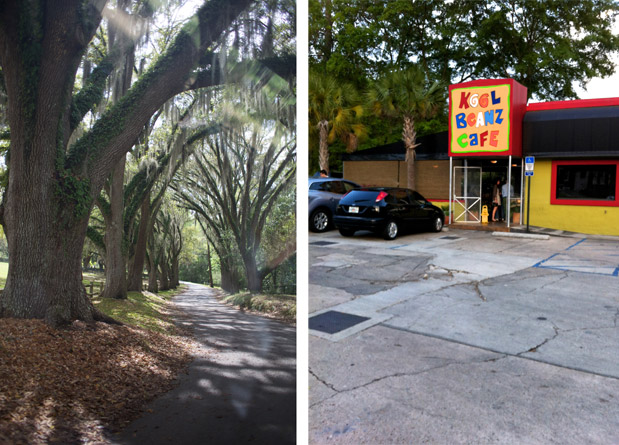 Later we found an old preserved plantation, drove around the grounds and admired the trees and moss and light. Then we went to the weirdest restaurant I never would have pulled off the road for, Kool Beanz. It was such an fantastic find and it was there that I had my first southern frog legs and fried quail. Their menu changes all the time and their offerings range from adventurous to simple and comforting, all with a southern flair.

The next day we drove all the way to Apalachicola to see the Gulf of Mexico. That part of the country is famous for oysters and they grow in such abundance that some of the roads are paved with their shells instead of gravel. 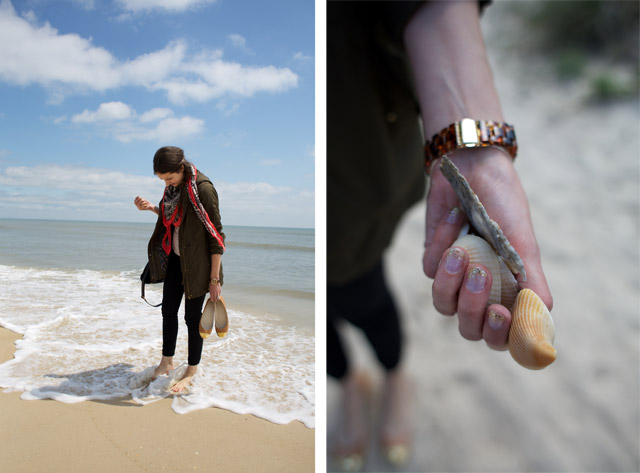 At the beach Cody and my grandpa turned into little boys and started collecting all the prettiest shells and bringing them to me. My coat’s rather large pockets were full of shells in about fifteen minutes. 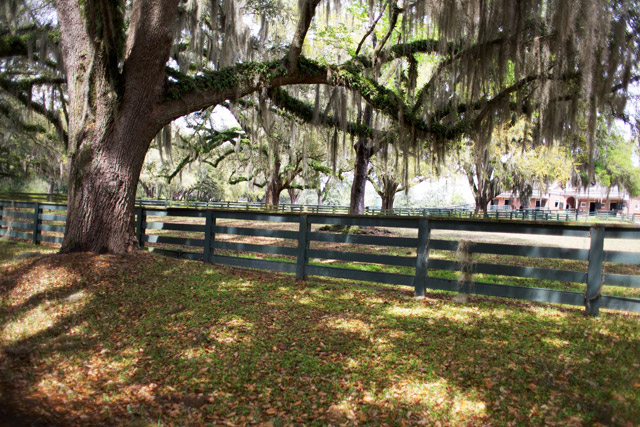 All in all it was a really great trip, we had some adventures, ate some good food, saw some pretty things, and balanced all the travel with a taste of the retired life. Oh and my grandma introduced me to a trashy new show called Baggage where contestants have to choose dates based on their dirty secrets. It’s ridiculous. Set your DVR immediately. It comes on after Family Feud, and I only know that because I was smart enough to go to Tallahassee.