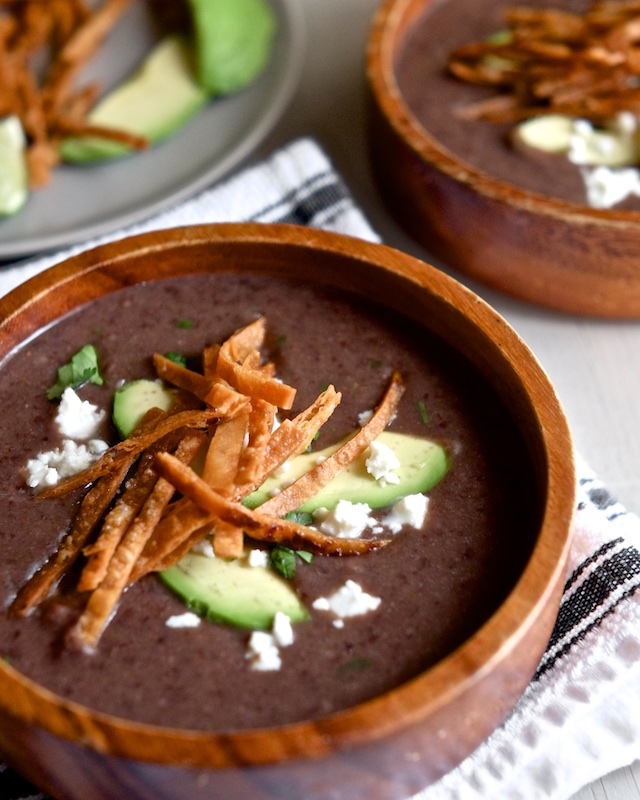 Black bean soup is one of the things that I don’t use a recipe for anymore. I had to reverse-engineer this for sensical public consumption, but you’ll see how intuitive it is once you get the concept. There are many different iterations of black bean soup, but this one is the most stripped-down and versatile. The soup itself is vegan if you use vegetable broth, but you could easily add chicken or chorizo or sour cream and they would play nicely together. I’ve decided to use canned beans here, just for the sake of ease.

The recipe starts with aromatics and olive oil, as most good soups do. Garlic and onion (of course) and there must be peppers – I usually use a bell pepper for flavor and a couple of jalapeños for heat, but these can be swapped out with your favorites, whatever they are (Anaheim, poblano, habanero – go nuts). From there it’s just cumin, salt, beans, broth, cilantro, and lots of lime. On it’s own it’s comforting without being boring, but it’s too fun to not dress it up a bit. I like tortilla strips, avocado, and queso fresco or sour cream, but you can put anything on it that would feel at home in a taco. 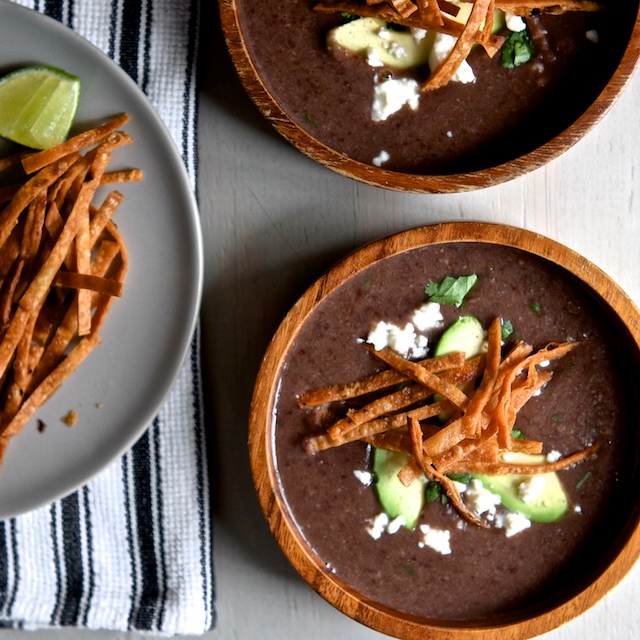 Ingredients:
-1 large onion, diced
-1 bell pepper, diced (I use green for this)
-2 jalapenos, seeded and diced
-2 cloves garlic, minced or grated
-about a tablespoon of olive oil
-2 tsp ground cumin
-3 cans black beans, drained of most of the liquid (but not all)
-3 cups vegetable or chicken broth
-salt, to taste (kosher or sea salt please)
-a handful of cilantro, chopped
-juice of one lime
-a few dashes of your favorite hot sauce (optional)
-toppings (use your imagination)

1. In a large pot over medium-low heat, sweat onion, bell pepper, jalapeño and garlic in olive oil until onion is translucent and peppers are soft.

2. Add cumin and a pinch of salt to the pot and stir until cumin is fragrant.

3. Add black beans and broth to the pot and stir. Increase heat to medium-high and allow soup to simmer for a few minutes.

4. Blend soup with an immersion blender until it’s as smooth as you like. I like it pretty smooth, but if you want to blend only part of the soup and leave some beans whole, that’s allowed. If you don’t have an immersion blender or a conventional blender (or you just don’t want to get it dirty) get a potato masher and mash the beans in the soup until it’s thickened to your liking, (it won’t get smooth this way, but it will get thicker) call it rustic.

5. Add cilantro and lime and taste the soup. You may not need to add salt if the broth you used was salty, but I usually do. Add a few dashes of hot sauce (my favorite is cholula).

6. Top with garnishes and serve.

-If you wanted to add chorizo or chicken to this (or bacon!), I’d recommend cooking the meat in the pot alone before adding the veggies, then transferring the meat to a plate while you make the soup and stirring it back in before you add the cilantro and lime. Chipotles are also a really good addition if you’re in the mood for something smoky – just dice one or two and throw them in with the rest of the veggies.