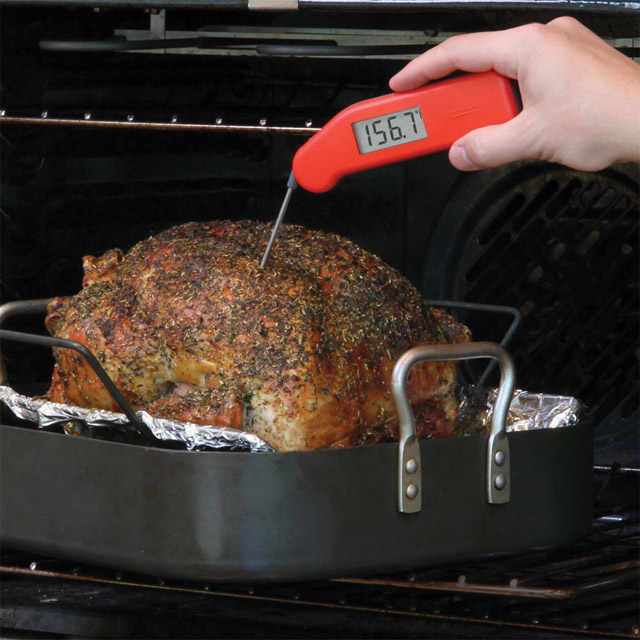 This post contains affiliate links, but it was not solicited and I stand by my words completely. I’m just super serious about thermometers.

We are a month into 2015 – how are those resolutions going? Uh huh. That’s too bad. Why don’t you try an easier one: get a thermometer and stop overcooking your meat.

Meat is just better when it’s cooked properly. Safer too, obviously, but it’s so much more delicious it will probably blow your mind, because (unfortunately) most people overcook meat pretty significantly. But it doesn’t have to be this way, and it really shouldn’t. The nice thing about resolving to stop overcooking meat is it’s more a problem of awareness and equipment than about making a deep personal change (like “getting in shape” or whatever).

For me, this is actually a moral matter too, because I believe meat deserves to be delicious. I’m obviously not a vegetarian, but I believe that most Americans take meat for granted, to the point of being wasteful and disrespectful. We don’t like to be reminded of the fact that, when we sit down to a bowl of chicken curry or a juicy cheeseburger – an animal died for it. I think that’s why so many people like white meat chicken – it’s consistently textured and barely reminiscent of animal muscle. But guess what – it’s a dead bird. Let’s respect that fact.

I love that our collective American food culture is moving more toward slow and sustainable and caring that livestock be treated well (like actual animals instead of future-food).  I also agree that we should all probably be eating less animal products in general and that we should definitely be shopping with our hearts instead of just our wallets and stomachs.

I think the logical extension of grass-fed, free-range, ethical meat movement is learning how to cook it properly. Properly cooked meat is more flavorful, more tender, and therefore much less likely to go to waste than mishandled meat. And be honest, last time you roasted a chicken, did you do your best to eat every last scrap? When meat is cooked properly, making use of every bit is a delicious joy rather than a chore. If we are going to be omnivores, I think making the absolute most of the meat that we buy and eat is the least we can do.

Buying a thermometer changed my cooking drastically and immediately and it will for you too. I think the Thermapen is the best, most versatile and most accurate on the market right now, but any thermometer is better than nothing. I’ve also appreciated having a probe thermometer which allows me to monitor the temperature of roasts while they are in the oven, making overcooking those expensive cuts almost impossible.

The easiest change you can make this year: be a better cook and a more responsible omnivore. Familiarize yourself with proper meat temperatures and get. a. thermometer.