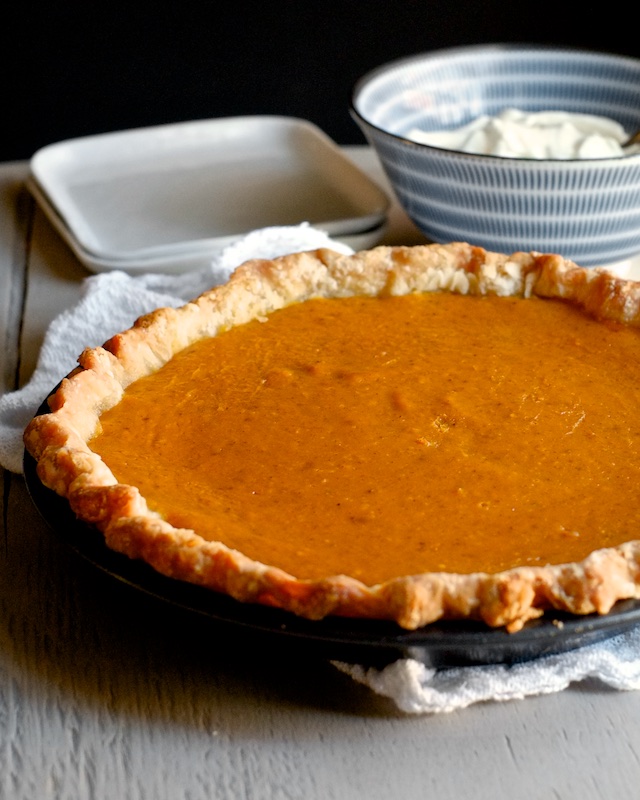 I know, the title. But I couldn’t help it.

There aren’t many sacred Thanksgiving recipes on my family’s holiday table. We experiment with turkey preparations and swap out stuffing recipes pretty freely, but this pie is not up for discussion. 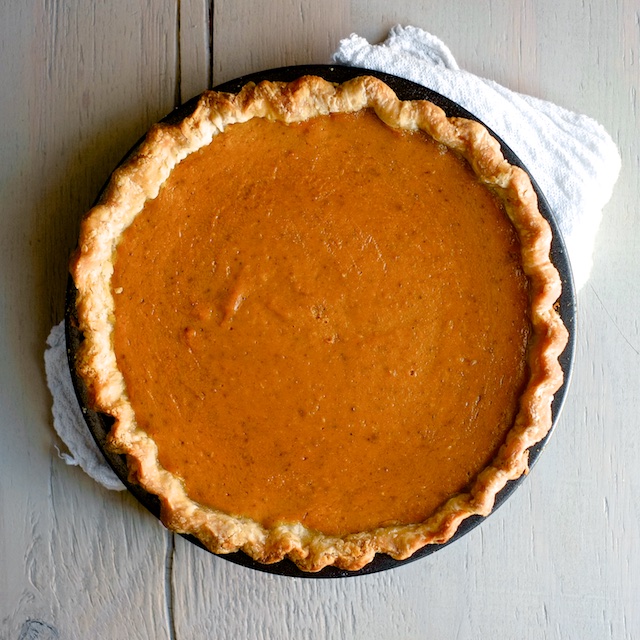 I’ve railed against the over-saturation of pumpkin desserts in the fall. I don’t really get pumpkin chocolate chip cookies (cookies should be crispy on the edges!), and adding pumpkin to cake just makes it dense and cloddish. I’d like to make it clear that this is where pumpkin and it’s associated spices belong. Preferably at max volume. 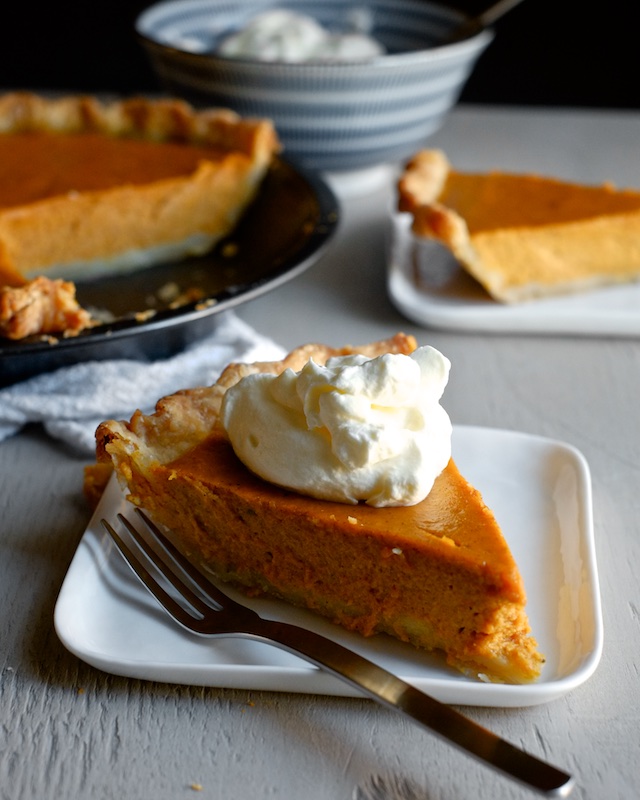 Everyone thinks their mom’s pie is the best. But this pie, MY mom’s pie (which she got from my grandma), goes to 11.

What makes this one great is spices – many of them, and in relatively large amounts. But there’s a secret one! Isn’t that fun? And it makes all the difference in the world. It’s BLACK PEPPER. Just the tiniest bit compliments the ginger and cinnamon and sort of stings your tongue in a way that makes you need another bite. Nobody will be able to put their finger on it, but they’ll notice this lovely heat that cuts through the sweetness and butter and cream and makes the pumpkin spice feel like real spice. 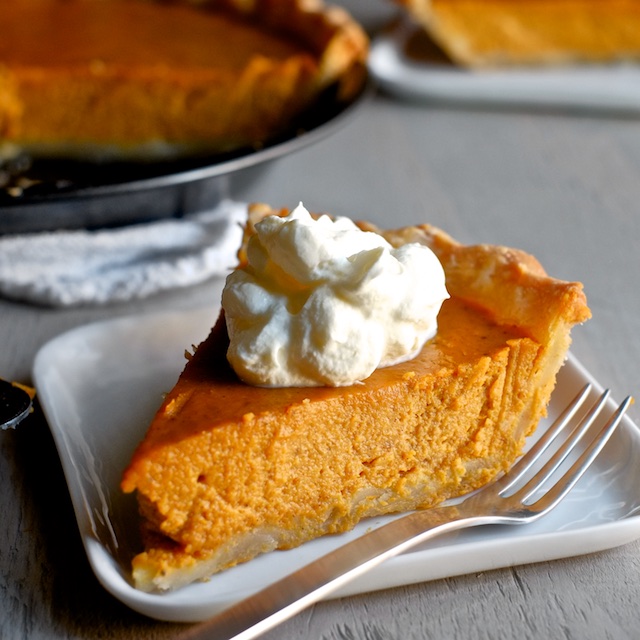 Speaking of cream though, let’s be real. 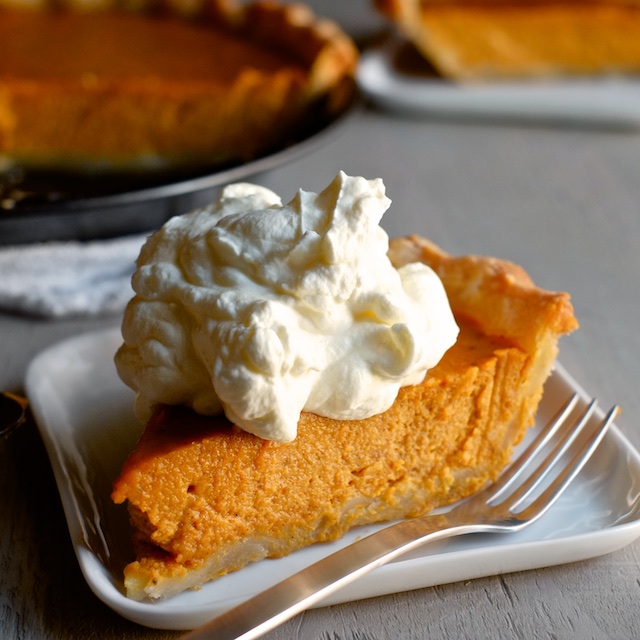 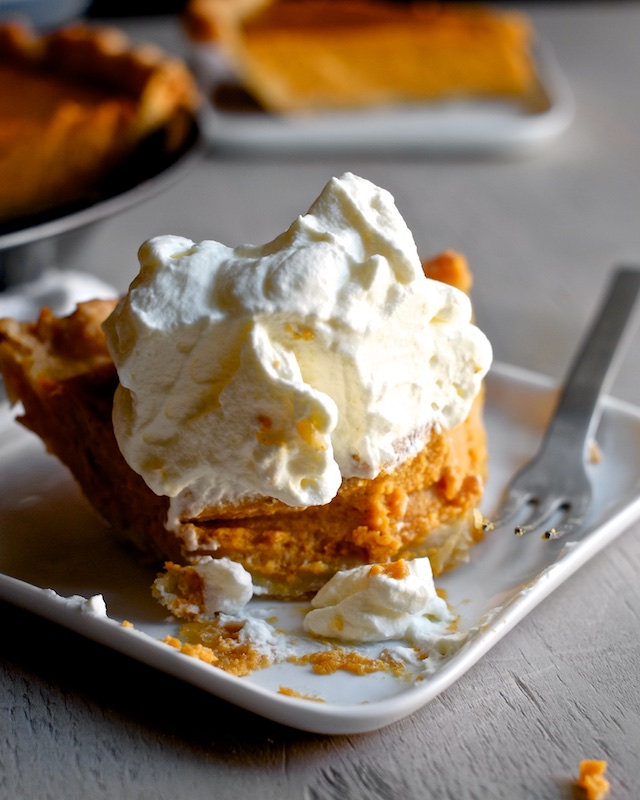 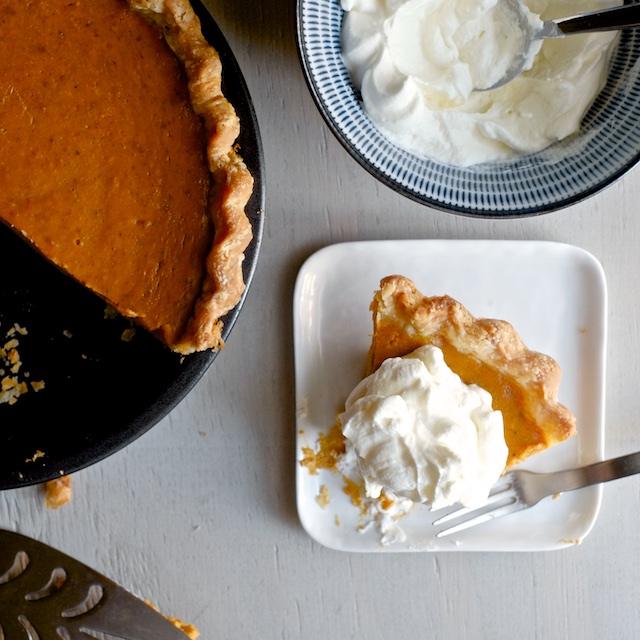 Method:
1. Prep your favorite nine-inch pie crust recipe. I like to use a regular old pate brisée recipe, but sometimes I use Trader Joe’s and it’s still delicious. I recommend blind-baking to avoid the soggy bottom-crust issue, though it does make an extra step. To blind bake your crust, stash your prepped crust in the freezer while your oven preheats to 450F. Then remove your crust from the freezer, line the crust with parchment paper and weight it down with uncooked rice or pie weights (every time I skip the weights, my crust just falls down the sides of the pan). Bake for 15 minutes. If you want more info about blind baking, read this.
2. In a mixing bowl, combine the flour, sugar, salt, cinnamon, nutmeg, cloves, ground pepper, and ginger. Whisk to combine and ensure any lumps of flour or cinnamon are worked out.
3. Add half and half, pumpkin, and eggs to the spice and sugar mix, and whisk to combine.
4. Pour the pumpkin mix into your pre-baked pie shell (remove the parchment and weights first, obviously) and bake at 350F for 50 minutes, or until the pie is no longer jiggly in the middle. Bouncy is ok, but not jiggly. (If you skipped blind-baking, bake your pie in the raw crust at 400F for 45-50 minutes.)
5. To keep your pie from splitting, cool it down slowly. When it’s done baking, turn the oven off and crack the door to let some of the heat out. Once the oven reaches room-temperature, remove your pristine pie for admiration. If you don’t care about cracks, you can skip this step completely.
6. DEFINITELY top your pie with whipped cream. I like making my own with heavy cream, sugar, and a pinch of salt, whipped up until it’s fluffy. Most of my family, on the other hand, prefers cool whip. Both are allowed.