Roasts need gravy – beef, bird, and swine alike. Especially if there are mashed potatoes involved. A hunk of meat and a pile of potatoes, laced together with good gravy become something more than the sum of their parts – a meal that feeds both body and soul. Gravy is easy enough for anyone to make and essential enough that everyone should. 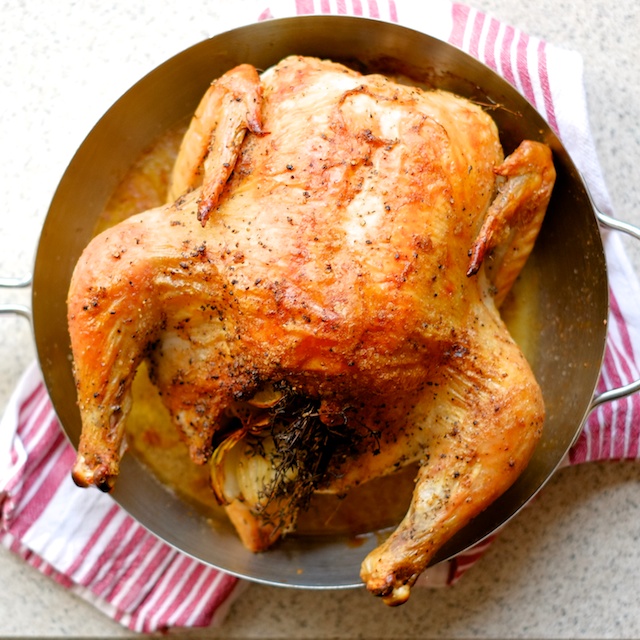 So let’s say you’ve roasted a bird. A process which deserves it’s own post, but for which I’ll offer one bit of advice here: use a thermometer. I like Ina’s method as well as this straightforward recipe from Food 52 which makes nice, crispy chicken skin inevitable. Anyway, there will be drippings. Pour them into a measuring container and skim off the fat with a ladle. Have a look at how much liquid you end up with – that’s how much gravy you will get. If you want to have more gravy than there are drippings, supplement them with some broth. A good rule of thumb is to make 1/2 cup of gravy per person, which should be enough for some leftovers. 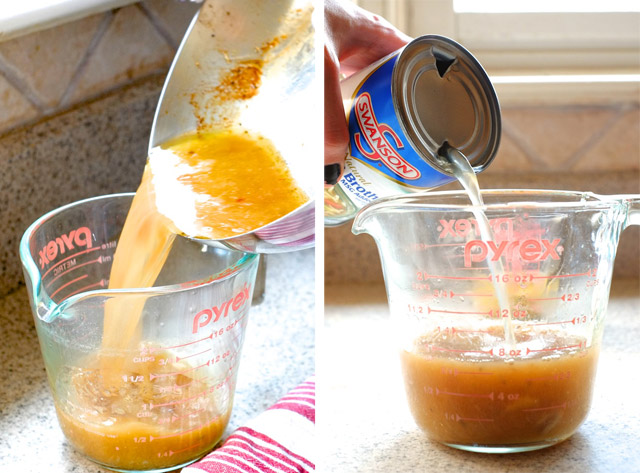 I like to make gravy in the same pan I use for roasting. Which means if whatever I’m roasting will fit in a regular skillet that’s what’s happening. In addition to drippings, roasts will leave you with some fond, which is the caramelized crusty brown stuff stuck to the bottom and sides of the pan and which taste like golden essence of truth and unicorn giggles. Take advantage if you can, but drippings should give you enough of the same if you can’t. 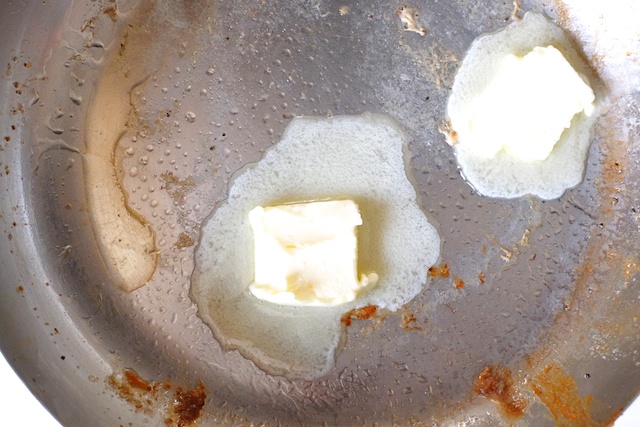 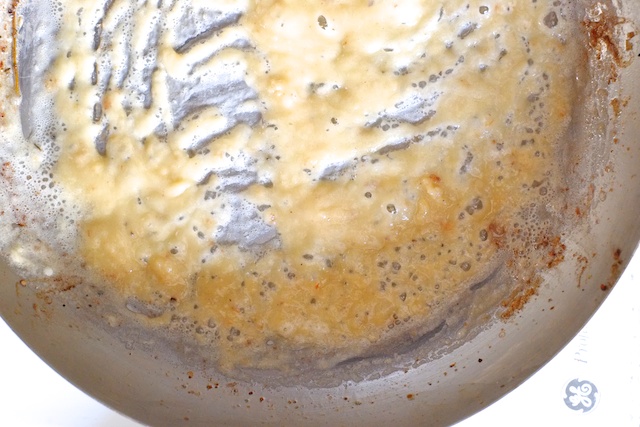 Add the liquid and whisk away. 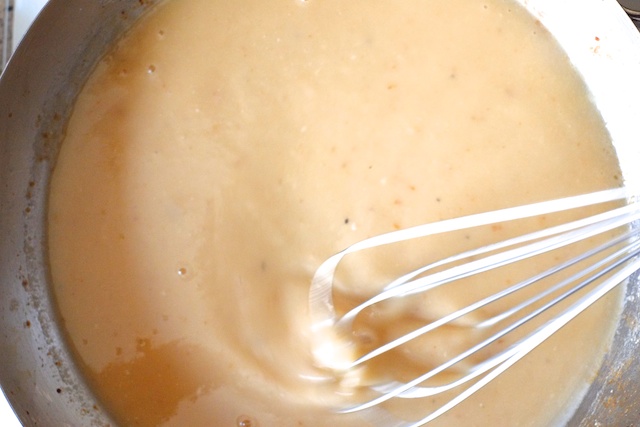 It’s best to save seasoning until the gravy is finished. If you’ve seasoned your roast well, the drippings will be quite salty, so taste the finished product before you add any additional salt.  If you want a really smooth and elegant looking gravy, strain it, but I like a few rustic flecks of fond and black pepper, so I usually don’t. 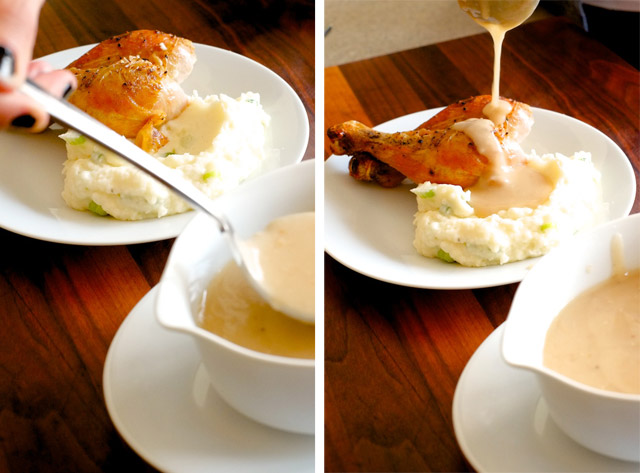 I like green onions in my mashed potatoes. And lots and lots of gravy. 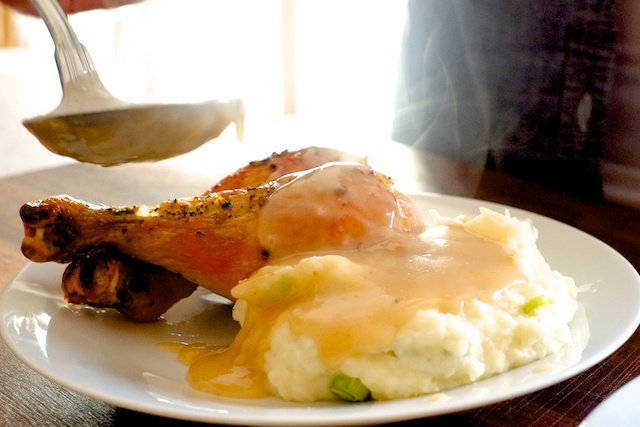 Gravy can be made with cornstarch if that’s what you prefer. Heat your liquid alone in the pan and use about one tablespoon of cornstarch in a slurry per cup of liquid. 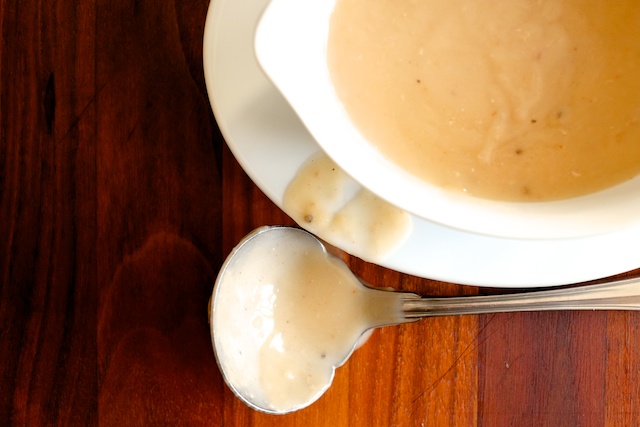 The breakdown of my formula for perfect gravy:

1. Pour drippings from your roast into a measuring cup and skim off any fat.

2. Supplement drippings with broth until you get enough liquid to make 1/2 cup per person

3. Make a roux (in your roasting pan if possible) with two tablespoons of butter and flour per cup of liquid.

4. Add liquid, whisk and simmer over medium heat until thickened. Taste, season if necessary, and serve.

Herbs like sage, thyme, and rosemary do really well in hearty gravies, and a squeeze of lemon at the end or even a glug of wine (added to the liquid at the beginning) can really brighten the flavor of your sauce. Gravies reward creativity, so feel free to experiment!