A Tip For Crispy Potatoes

Potatoes and me – we are a thing. I don’t care if it’s flabby steak fries or plain bakers, I want them. My love for spuds has led me to experience both the highs and lows of which the humble root vegetable is capable. And it turns out I have a favorite – fried crispy outside and fluffy inside, no skin, aioli instead of ketchup (or in addition to…).

I dislike deep-frying at home, and basically stopped a few years ago because I hate how it makes my house smell. Besides, fries at a decent restaurant usually turn out better than what I can achieve at home. But these were so good, I’m re-thinking my prejudice. 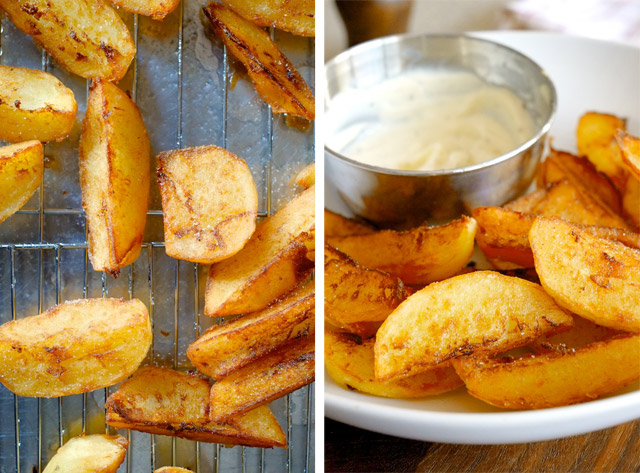 The trick is pre-boiling the potatoes. I got the idea from Cody, who used to live in England and got to watch a few families make their Sunday roast dinners. They made these perfectly crispy potatoes that were boiled, smashed up (to rough up the surface of the potatoes), and then roasted with lots of oil. I hated the idea of adding another step to the process of cooking potatoes so it took me eight years of prodding from Cody to actually give it a try. I also saw this Jamie Oliver roast potato recipe where he calls the step “chuffing up” the potatoes and the idea was suddenly, adorably irresistible. The fact that the potatoes are cooked in two phases makes achieving a crispy outside with a fluffy inside pretty impossible to screw up, so the extra step worth it to me.

I fried my potatoes because I felt ambitious at the time, but I’m going to try roasting next, with Jamie’s video as a guide.

To make these, I boiled my potatoes until they were almost all the way cooked before cutting them up (which is longer than you should boil them if you’re going to roast them in the oven). Then just heat 3-4 inches of oil in a dutch oven or deep pot over medium heat until a piece of potato dropped in bubbles pretty violently. Pull them out when they’re golden brown and salt them immediately. You can turn regular mayo into aioli by adding garlic. Seriously, aioli is garlic mayo. Nothing else to it really. 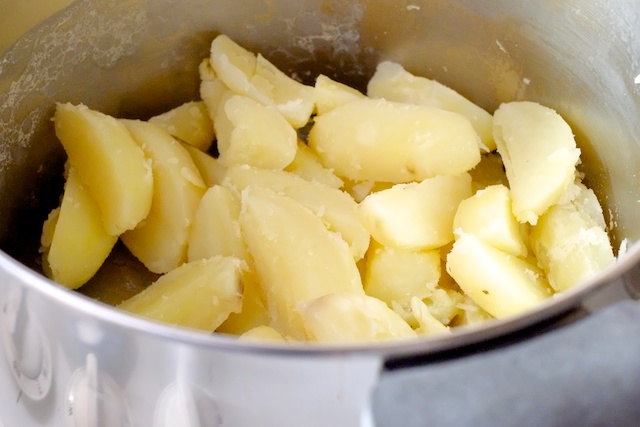