UPDATE: This recipe has been updated here!

Serious bakers and confectioners spend a looong time perfecting the art of working with sugar. Caramel, for example, is basically browned and melted sugar – and that’s really all it has to be, but temperatures and added fats can turn burned sugar to anything from a sauce to a brittle. Chocolate can also strike fear in the hearts of cooks, with words like tempering and the threat of seizing. Millionaire shortbread is made of a layer of shortbread, a layer of caramel, and a layer of chocolate. So, basically, it has the potential to be one of the fussiest treats you can make.

I happened upon a version of this recipe while I was working as a cook. I didn’t realize at the time what a foolproof gem I’d found, I just followed the recipe as well as I could between mixing cookie dough and checking on cakes. It worked, and I had no reason to believe it shouldn’t. We sold them and they were eaten and all was right in our little cafe. Now that I’ve lived a little more I know what a disaster it should have been. No candy thermometer, no tempering chocolate, just some stirring and pouring and ta-da: candy bars. 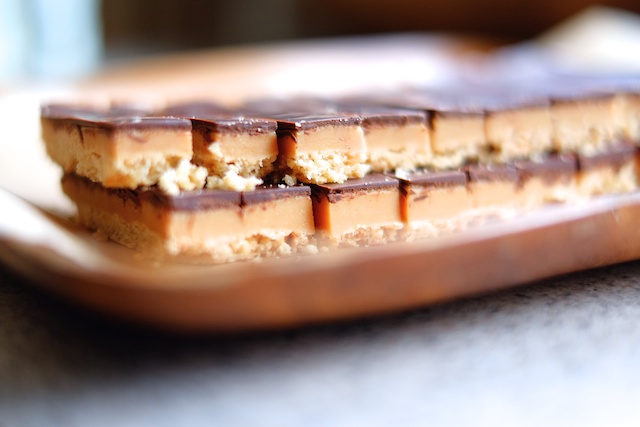 You start by making shortbread with flour, sugar, cold butter and a pinch of salt. That’s it. Then cut cut cut with a pastry cutter or squish with your hands until the whole mess looks like lumpy sand. If you use your hands I’d recommend cutting the butter into chunks before working it into the flour, or you’re in for a lot of squishing. 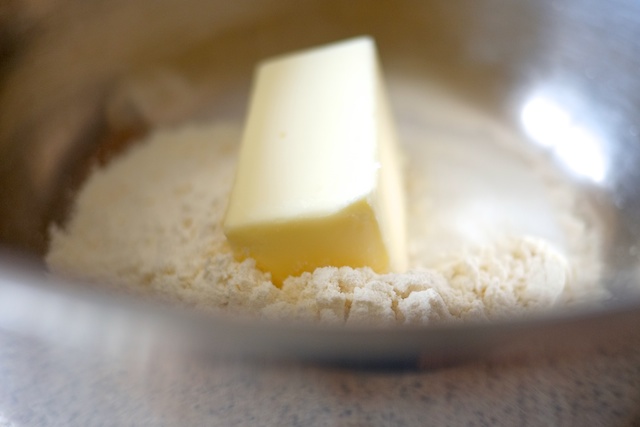 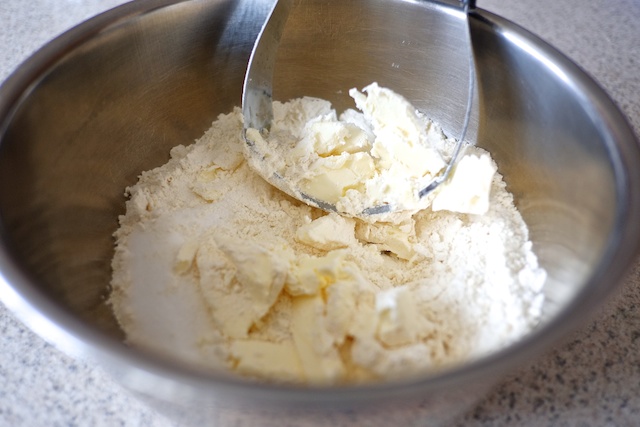 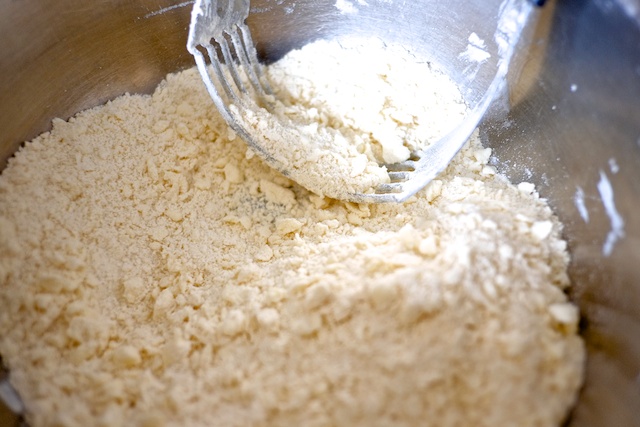 It looks too dry to possibly work, but dump it into a lined 9×13 and press it into an even layer. It will happen. And it will transform in the oven. You won’t recognize it. 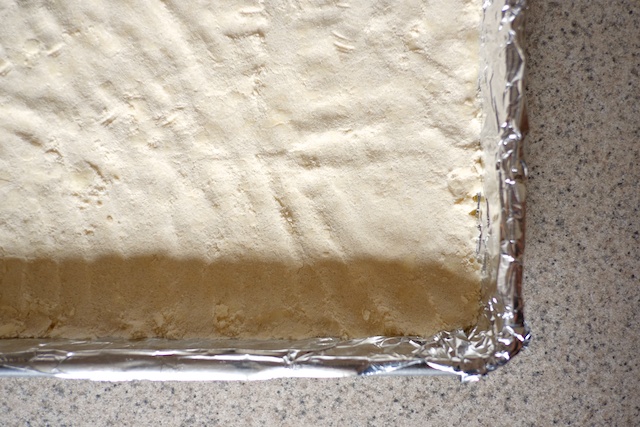 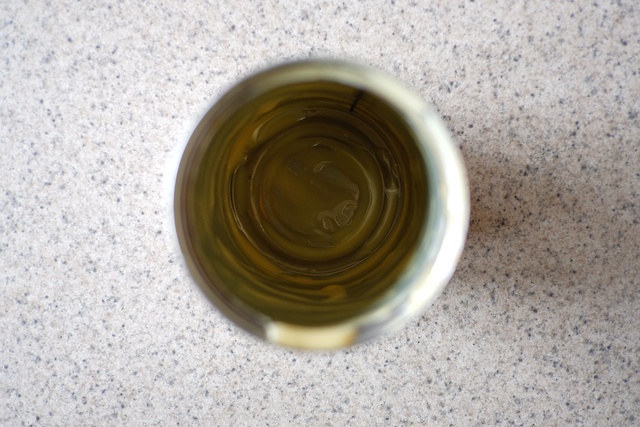 Condensed milk, sugar, and a little corn syrup (I know, I know – but it’s necessary for texture) and cook it on medium heat until it bubbles. You need to hang around for this part and stir. A lot. 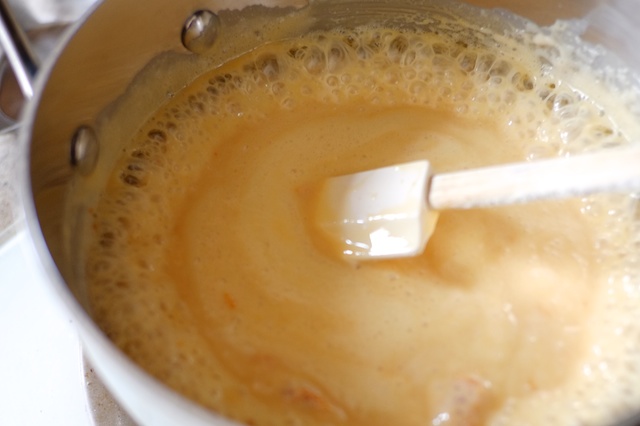 After a few minutes of stirring it will look like this. 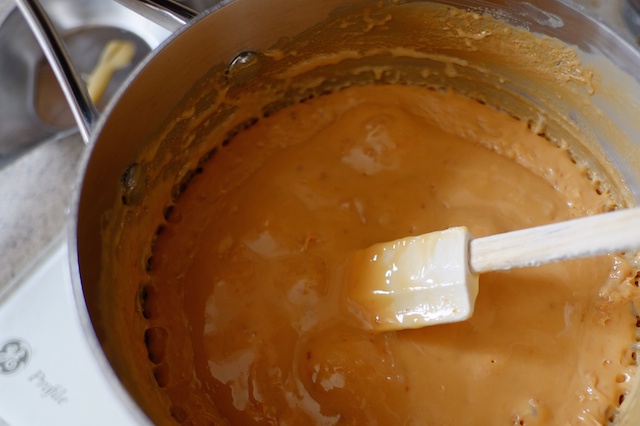 When you are happy with the color, take it off the heat and stir in the butter. Then SALT it and taste it. Try not to burn your tongue, but you probably will. Make sure it’s nice and balanced and salted enough that you can taste the butter. Pour it over the shortbread and spread it evenly. 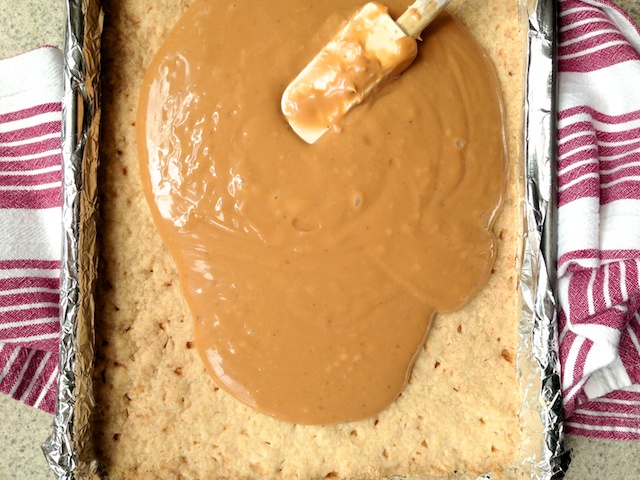 Then get some of your favorite chocolate and put it in a double boiler, which is just a bowl on top of a pot of simmering water. The double boiler takes all of the guesswork out of melting chocolate, which can be disastrous if you try to do it over the stove. It will take a few minutes to melt, but it’s worth the wait. When it’s smooth and pourable, spread it over the shortbread and caramel, and put the whole thing in the fridge for an hour. 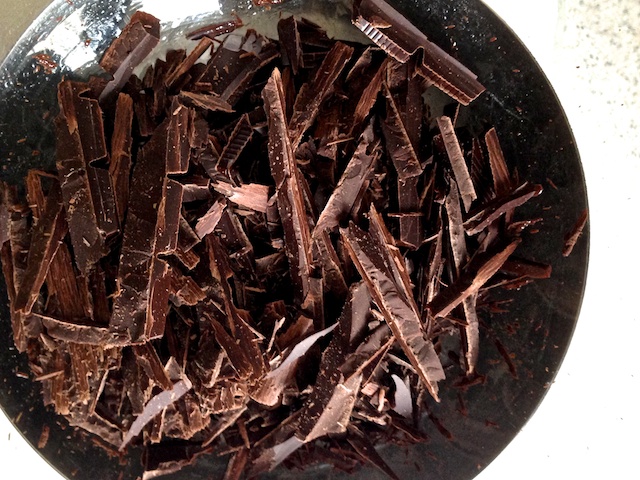 When it’s set (you’ll know when the melty shine of the chocolate fades into a soft luster) cut it into bars. Use a ruler if you have the patience. I never do, and my bars are always uneven. But I don’t care. 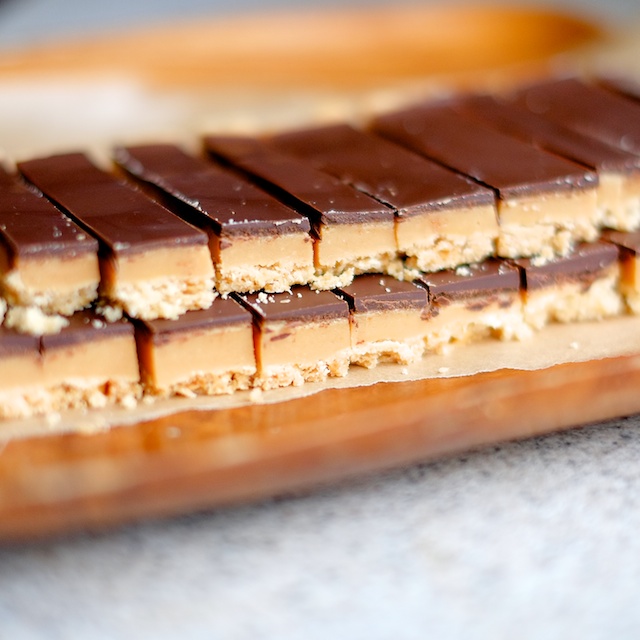 Sooo my awesome graphic designer sister Caroline made a pretty version of the recipe for you all! She’s a photoshop whiz and she’s way better at organizing information than me. So, without further ado, the fruit of her labor: