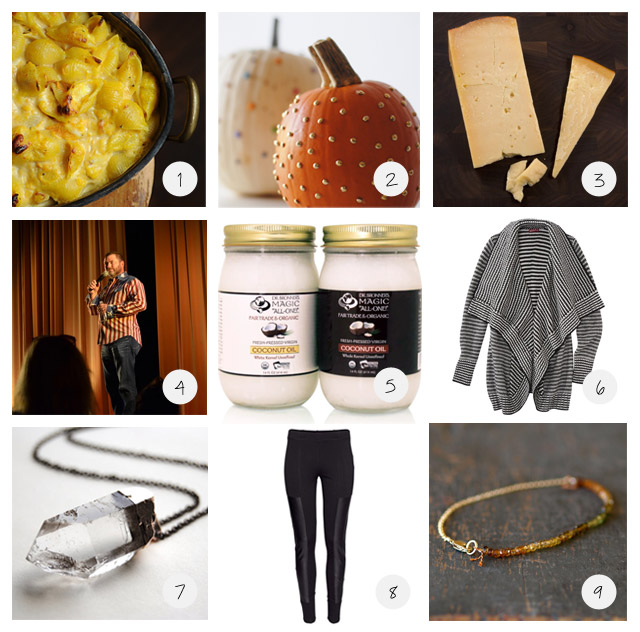 I love lists. I’m not particularly organized by nature, but I am frequently compelled make lists. This is a little collection of some of the things I’m glad to have stumbled on recently.

1. Savory pumpkin recipes. This mac and cheese is from Food 52, and I found another amazing looking pasta recipe with pumpkin, fried onion and sage from Cafe Johnsonia that made me mad that I didn’t think of it first. Can fried onions be the next big food trend please?

2. Tack studded pumpkins. I haven’t done much to celebrate Halloween the last few years, but I really like it as a holiday. The decorations are fun, you don’t have to stress about spending money on gifts, and there aren’t any rigid food traditions except for candy, so you can make something different every year. I’m tucking away this simple and cute pumpkin decorating idea from A Subtle Revelry for when I get my own place to fancify for halloween.

3. Fall fruits like apples and pears go so well with cheese. I especially adore them with aged goudas, and I’ve been obsessed with this brand for a couple of years now: it’s called Two Sisters Isabella and it’s unreal – buttery, sharp, nutty, and so rich it’s almost sweet. Plus it has those nice little crunchy crystals that all really good aged cheeses have. I’ve ordered it from Murray’s cheese shop in New York before and they did a great job shipping, but check your local cheese shop first!

4. This is old news that I just found out about, but Nick Offerman (Ron Swanson of Parks and Recreation) wrote a book, entitled “Paddle Your Own Canoe: One Man’s Fundamentals for Delicious Living”  and it looks like a gem (I mean, that title!). My favorite thing about Nick Offerman is that he basically IS Ron Swanson: expert woodworker, total man’s man, and married to the actress who plays Ron’s crazy ex Tammy, Megan Mullally. He did a little stand up routine at Tulane University a couple of years ago while promoting the book, and his act was really one sincere nugget of wisdom after another, delivered with his signature dry humor (and peppered with silliness here and there). I especially like what he had to say about pursuing hobbies. Not everyone has the luxury of a career they find personally fulfilling, so it’s important to find something you do for you that makes you feel alive. Deliciously so.

5. Coconut oil as a beauty product. I’m theeee worst about remembering to moisturize, and when the weather cools off, my skin likes to reward my forgetfulness by breaking out in little dry bumps on the backs of my arms (tmi? too bad). I’ve started using coconut oil as my after-shower body moisturizer and I love it. It smells amazing, it sticks around longer than lighter oils  (like Neutrogena’s sesame oil), and I keep it in the shower so it’s easy to remember to slap some on before I grab my towel. Apparently Dr. Bronner’s has a fair trade coconut oil, so you can take it a hippy step further and moisturize organically AND ethically if you like.

6. This sweater. I found it at Target and had to take it home. It’s chunky and long enough to cover my bum (which means I can wear leggings as pants in public!) and the pattern is graphic and interesting without being straight-up “tribal”. Don’t get me wrong, I really like tribal prints, but I have my doubts about the trend’s longevity. Not that this is a big investment piece – it’s $30 bucks – so go get one.

7. Rugged stones. I really like the masculine yet delicate thing that’s happening with jewelry lately, and I feel like raw stones are a great way to add a little sparkly impact without venturing too far outside the realm of the geometric. This quartz necklace is from SPARKLEFARM on etsy. I ordered one for my mother in law for mother’s day and I’m her new favorite daughter in law. Also her only daughter in law, but that’s beside the point.

9. Gems and chains – I love this little bracelet I found on etsy from ShopClementine, but i’m lobster-claw challenged (can anyone get them on with one hand?) so I’m thinking about making some of my own with the beads strung on stretchy plastic thread so I can look fancy while being lazy.

What’s on your brain this fall?