I love potatoes. We’ve been over this. When my aunt told me about a restaurant in Annapolis whose menu was mostly comprised of loaded baked potato combinations, I knew I had to go. But I put it off because Annapolis is crowded and far away and there’s no parking. Luckily, a few weeks ago, my darling friend Caitlin had to go to our nation’s original capital anyway to pick up some papers for some running event she signed up for (weirdo) so we made a date of papers and potatoes.

It’s the concept of the Potato Valley Cafe that drew me in like a moth to the flame. Who makes a restaurant about potatoes? Geniuses! Before we got there I told Caitlin, “There is a strong possibility that these potatoes have no chance of meeting my expectations. I’m unduly excited about them”.

Long story short, the potato exceeded expectations. It was perfectly baked with crispy skin and fluffy insides. I chose the broccoli, blue cheese and cheddar potato. It came topped with broccoli, blue cheese sauce, cheddar cheese, a salad-bar’s worth of vegetables, and DANISH ROASTED ONIONS (which are kind of like the onions you put on top of green bean casserole but a million times better). I bought a bag of those onions to take home. More on those on another day. Next time I’m going to try the spinach, feta, and roasted garlic potato because it, too, sounds mighty fine. 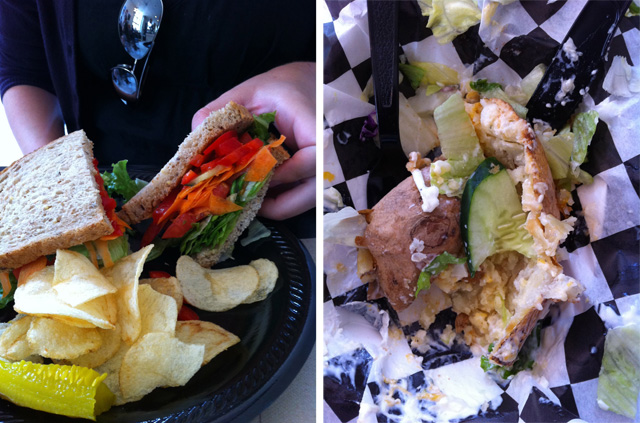 Caitlin got the prettiest veggie sandwich in the world. Look at the colors! In retrospect, she should have added avocado to it, but by the time we realized it was an option, it had been half eaten.  That picture on the right is what was left of my potato after my hunger had been sated. It didn’t stand a chance.

If you like potatoes, cheese, crispy onions, food, joy, or America, you need to go to Annapolis and eat a potato at Potato Valley Cafe.