Our hotel in Minamitane, the Sun Pearl, was a real family operation. The owner and his wife, his daughter (the manager), and his brother in law (the cook) all live in homes that were built adjacent to the hotel, so work and home life are very blended. The hotel lobby was like an extension of their living room and they would often have friends over late at night while they were waiting for people to check in. 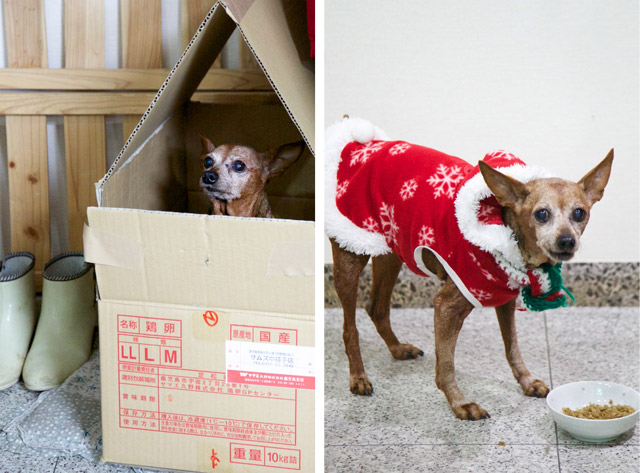 One fixture in the Sun Pearl lobby was Mama-san’s dog Lee, who nudged her way into my heart without meaning to. She doesn’t really like people at all. Or maybe just Americans, I have no idea. A few of us attempted to pet her and she’d consistently bark or nip and run away. She’s a very old and very cranky miniature pinscher with a handful of age-related health problems and all she really wants in life is to be in Mama-san’s lap. But Mama-san is busy, so sometimes Lee has to hang nearby and hold her own against the big, loud Americans. After a few barking fits Mama-san got the idea to put her in a box, which made her feel just safe enough to let people get a closer look.

I mentioned a while back that I’d brought a stash of cheese from Tokyo to share with a few people at the hotel. So one day I found some plates and put together an impromptu cheese and cracker situation and brought it to the lobby. Lee appeared almost immediately, ran up to us, forgot her fears, put her paws on our legs and acted like we were old pals, in the name of cheese. We understood each other, and I got Mama-san’s approval to share a small piece. And that’s how this anti-social curmudgeon of a thing weaseled her way into my affectionate memory.