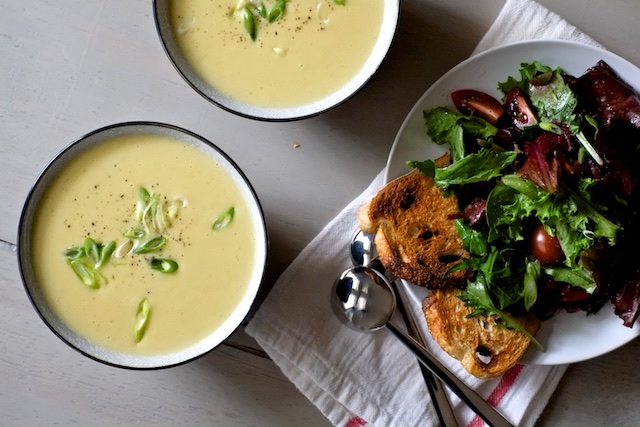 Have you ever invited friends for dinner and had them request soup? Friends of mine who have been fed this soup, if they don’t outright ask for it when they come over, will silently hope that I make it for them (I know because they tell me how happy they are when they see a big pot of it on the stove). For dinner. They want soup.

I discovered a version of this soup when I was working at my favorite kitchen job in a breakfast and lunch cafe in Salt Lake City. This soup was our Friday soup, and it always sold out because it is garlic cheese velvet.

It’s hearty stuff, being made of potatoes and cheese, so I serve it with a big salad and a bit of toast and nobody ever complains.

It adds some time to the process, but don’t skip the potato-baking step. Potatoes that have been baked have a hugely different flavor than potatoes that are boiled or microwaved, and it screws up the soup if you leave it out, so take the time and bake them and you will be richly rewarded. If you can salvage the skins, cut them in fat strips, swipe them with butter, sprinkle with salt and pepper and cheese and bake them in a 400 degree oven for 20 minutes for a nice crispy potato skin topping or side nibble (maybe even in lieu of toast).

1. Preheat your oven to 400F, scrub your potatoes and pierce the skin once or twice with a knife. Bake them straight on the rack for about an hour, or until a knife inserted in the side goes in and comes out with almost no sticking or resistance.

2. While the potatoes bake, prep your leeks by trimming the roots and dark green parts away (dark green parts are fibrous and not so edible). I like to rinse mine by cutting them in half lengthwise, slicing them pretty thin, and putting them in a large bowl of water. Use your fingers to separate the layers in the bowl of water and give the dirt and grit time to sink to the bottom of the bowl. Drain the leeks by lifting them out of the bowl with a strainer or your hands, leaving the dirt and water in the bowl.

3. In a large pot, heat butter over medium heat and cook the leeks until soft. Add the garlic and cook until fragrant. Before the garlic takes on any color, add 4 cups of chicken broth and bring to a simmer.

4. When the potatoes are cooked and cool enough to handle, cut them in half length-wise and scoop out the flesh. Add the baked potato flesh (ew, is there a better word for that?) to the pot with the leeks and broth.

5. Blend the potatoes and broth/leek mixture with an immersion blender until completely smooth. The texture might be pretty thick at this point, but you can thin it later (in step 7) with more broth (that’s what the extra two cups are for).

7. Remove the soup from heat and whisk in the cheese, a handful at a time, until it’s fully melted and smooth. This is the best point to adjust the thickness of the soup to your liking by adding more broth if necessary.

8. Season the soup to taste with salt and pepper and serve topped with sliced green onion.