This Tokyo post is way late, (4 months but who’s counting?) and I was planning to chop it up into a few posts but I don’t think I can wait this long and be calculated about it. So it’s a photo-dump, but hopefully a nice one. On our way home from Tanegashima, Cody and I decided we’d better take advantage of the opportunity to explore Tokyo, and chiseled out a ten day stretch to enjoy the city. We used Airbnb and found a nice, clean, and cheap studio apartment in Shinjuku, which is an area we had already explored a tiny bit. Our host was great, spoke very good english, and gave us a list of restaurants to try in the area, which we did, as well as maps to local sights and transit, and a wi-fi hotspot card, which was SO nice for me because I had my phone in airplane mode for the entire trip (to avoid international calling and data fees), so having my own wifi card felt pretty luxurious.

Our first day in the city we decided to explore on foot and found our way to Yoyogi park and the Meiji Shrine. 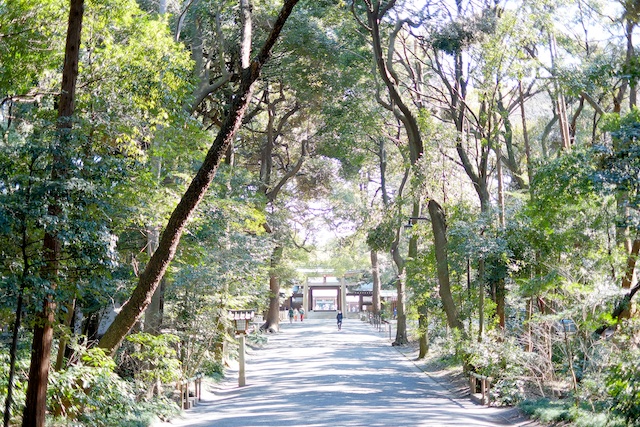 We were lucky enough to arrive during a wedding procession and got to see the bride, groom, and families decked out in traditional kimonos. The procession moved slowly and was very quiet, but the bride and groom were all smiles. 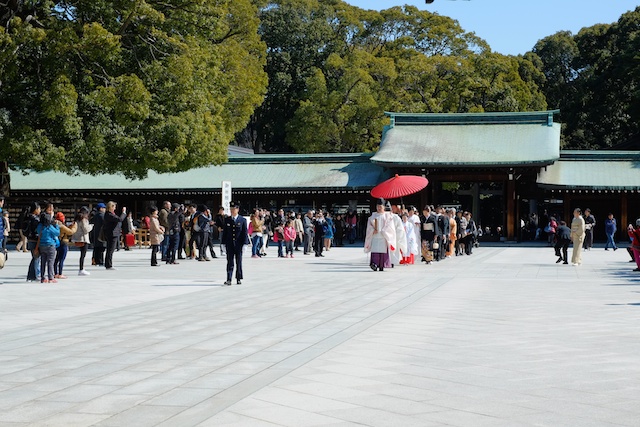 Yoyogi park is also known as an area for cosplay enthusiasts to congregate. I think I missed the main crowd in their anime getups, but managed to catch an interpretive Elvis-dancing group named the “Lebels” (according to their custom leather jackets). They played Elvis music and did a lot of knee swiveling and attracted a substantial group of gawkers. 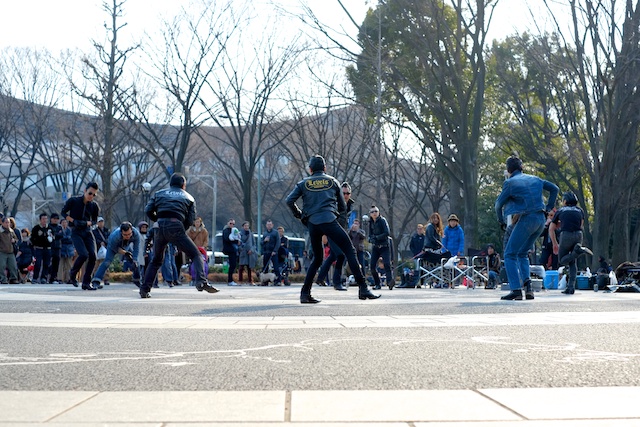 Another highlight of our trip was Hakone park, which is at the foot of Mt. Fuji and offers really great views of the mountain. We paid about $50 for each of us to have a park day pass, train fare to and from the park, and access to all the transit inside. We started with a train at Shinjuku station that took us all the way to Hakone, and within Hakone we rode the railway that made a lot of switchbacks climbing up a Fuji-adjacent mountain, and the ropeway which gave us some incredible views of Fuji-san. A lot of people go to Hakone as part of a tour group and stay overnight to take advantage of hot springs and fancy hotels in the area, but we felt like it was easy to do on our own, and pretty good for a day trip. 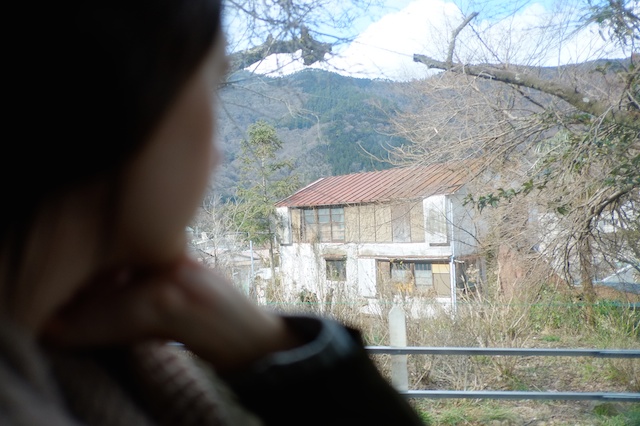 Cody was sick during our trip to Hakone and was happy we got to spend a lot of time sitting and enjoying pretty views from the ropeway. Hakone is a relaxing little jaunt. 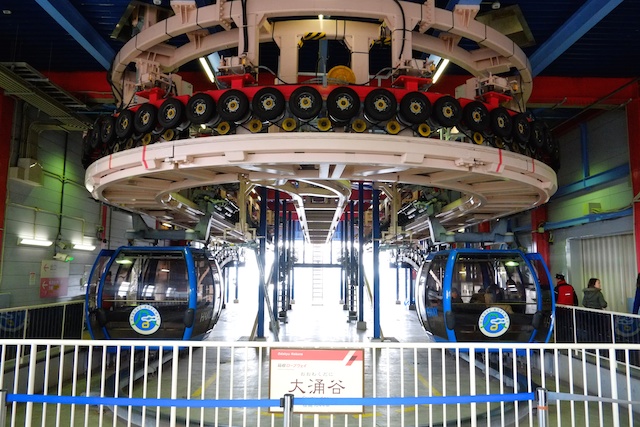 Up at the top of the ropeway is a gift shop that sells Fuji-related gifty things and specializes in little snack bags of eggs boiled in the sulfuric hot springs. The sulfur turns the egg shells black, so it’s a pretty cool novelty item. But I have to say, those hot springs smell pretty intensely, and that violent eggy aroma tickling the back of my throat didn’t really make me hungry for more egg. Anyway, that little cage on a rope below is a fresh delivery of sulfur eggs from the hot spring. 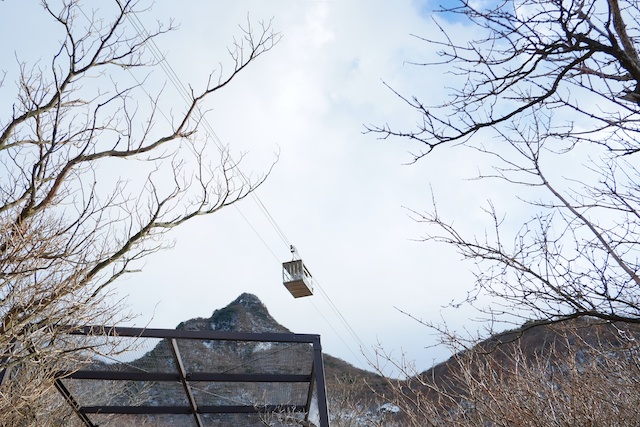 The hot springs, while smelly, look pretty dang cool, especially in the late winter when it’s chilly out and the steam comes off the water in big puffs. 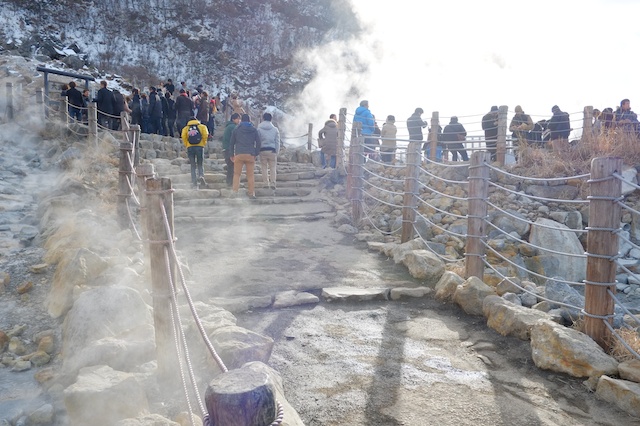 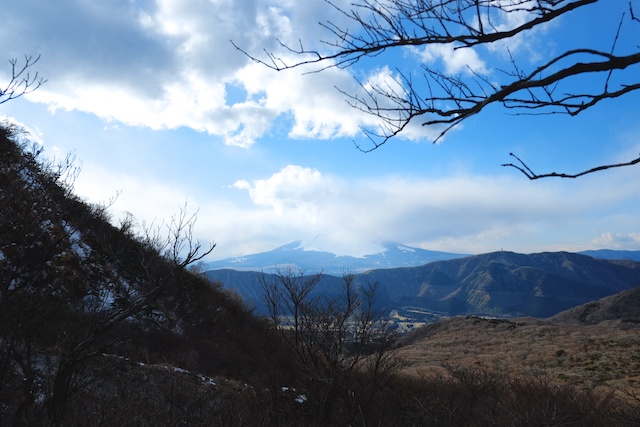 This is the forward-view when you ride the ropeway, a little scary but really cool. 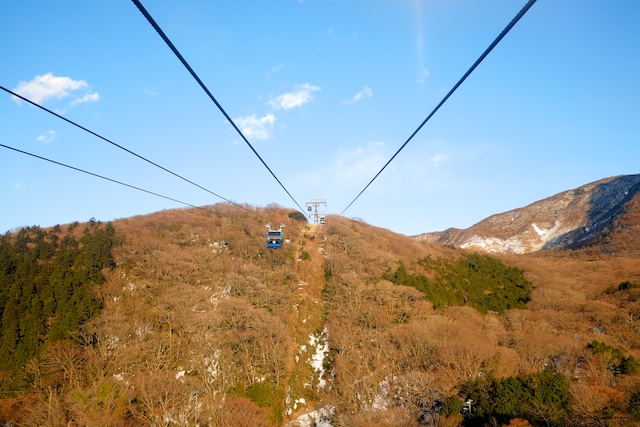 Back in Tokyo, on another of Cody’s sick days, we stayed close to home and visited the government building across the street from our apartment to check out the views from their public observation deck. That’s a shot of Yoyogi park below. 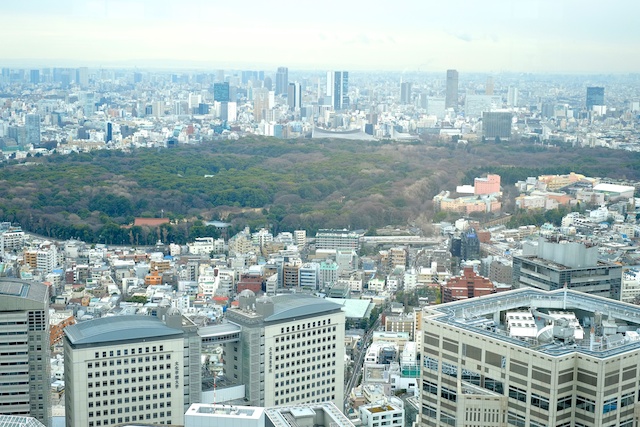 And that’s the government building, shot from the foot. 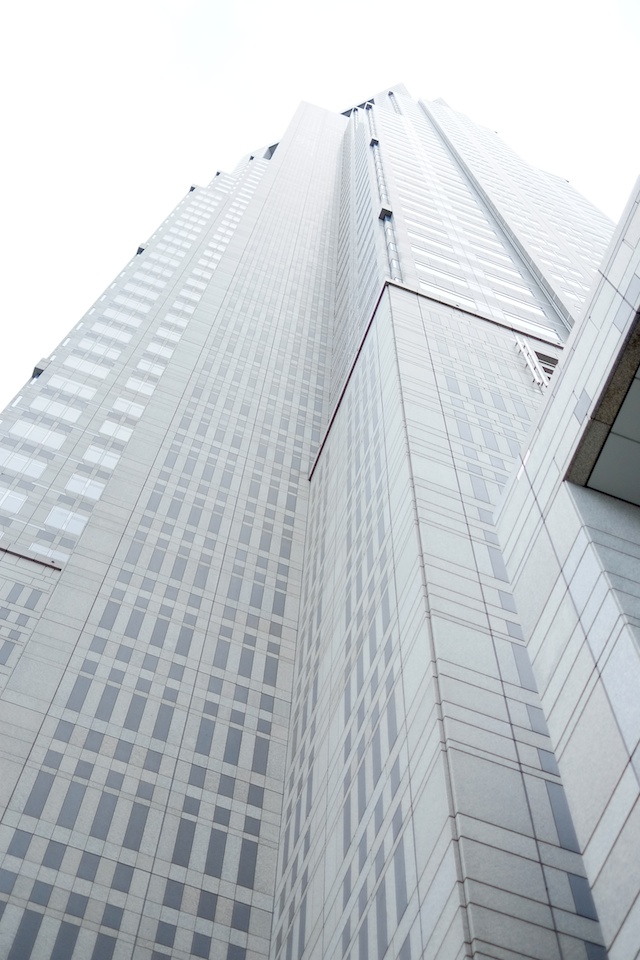 Later in the week, when we were feeling better, we visited Tsukiji fish market, and holy crap. It was so crowded and everything was moving and have you ever been dizzy just from looking at things? Because that’s what happened to me. 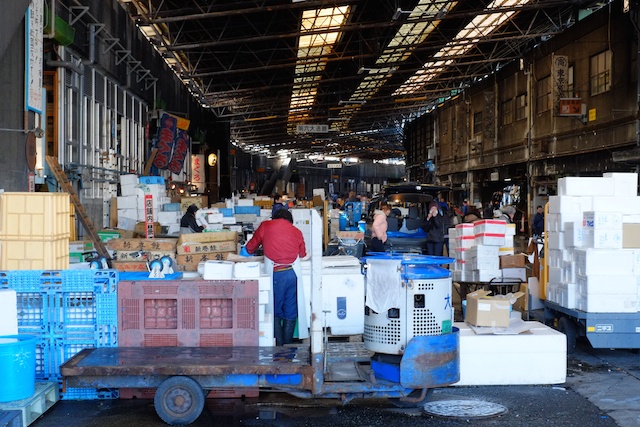 This place is kind of stressful when it’s crowded because the little trucks that people drive around have the right of way over pedestrians and tourists (they are there for business) and people are trying to buy things on your left and your right and there is no space and you are literally always in someone’s way. We didn’t get many photos because we felt like we couldn’t stop walking long enough to do a lot of snapping. But still, you need to see it if you’re ever in Tokyo. It’s mindblowingly big and busy and it smells shockingly good – like ocean water and not at all  like your local grocery store’s fish department. 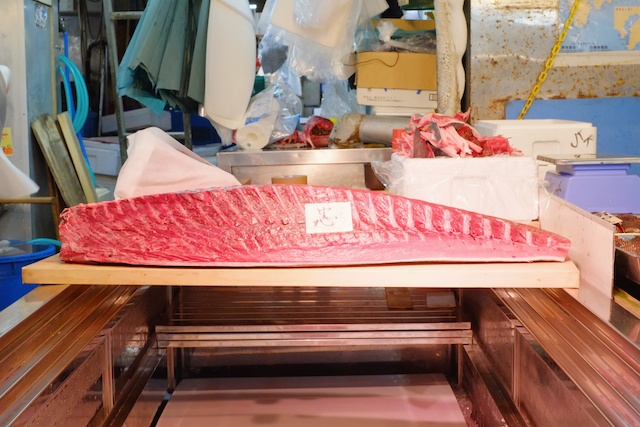 A large slab of tuna and some kind of dried cuttlefish stacked like paper. 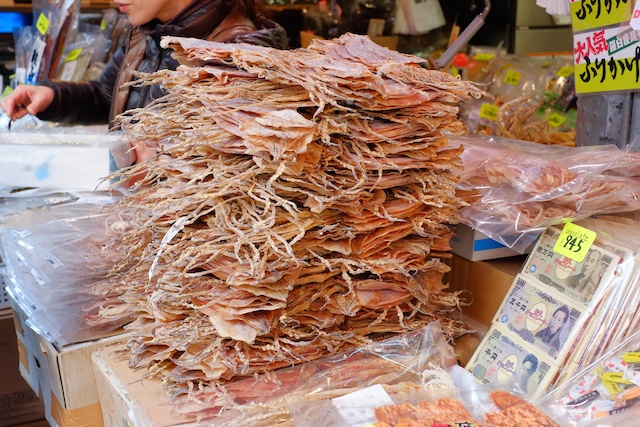 Below is a shot from the exterior market surrounding the fish market. They sell everything from cookware to spices to nori and souvenirs. It is also crowded. 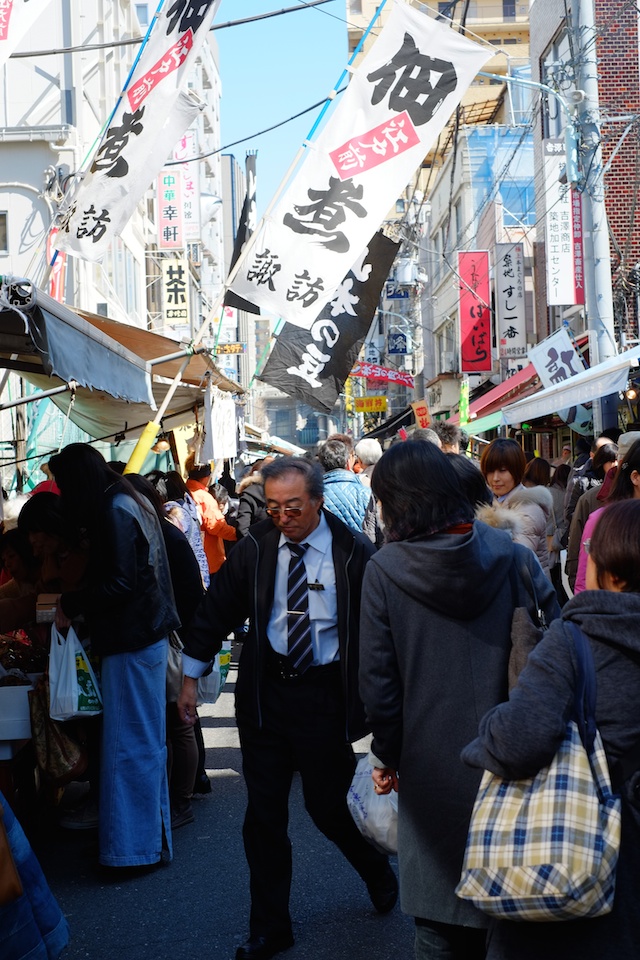 We found some breathing space afterward in a nearby park. I can’t remember the name of the park, but it was home to the Kyuinao shrine. Maybe it’s Kyuinao park? 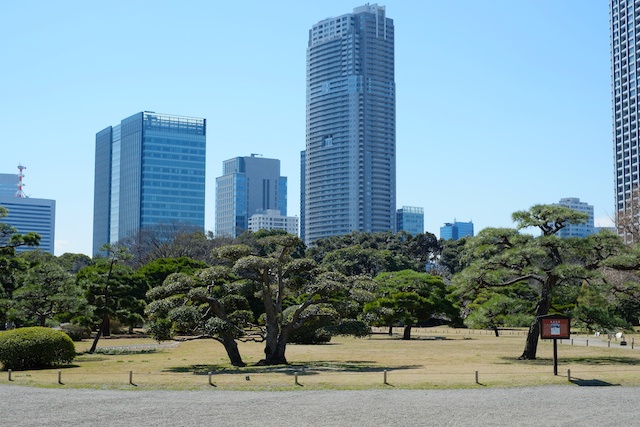 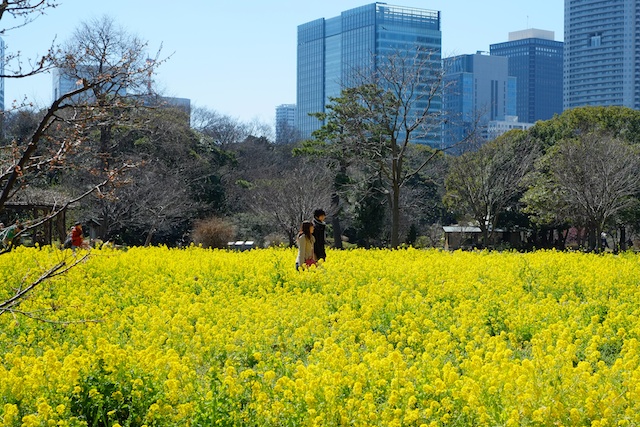 And later in the week, we ate some ridiculously good sushi at one of those conveyor belt places. I learned to like sushi in America, but Japanese sushi is completely different. The fish tastes cleaner and it has a texture that’s somehow firmer and meltier than American fish at the same time. I couldn’t ever understand how someone could want to fill up on sushi in the states, (it’s just not that good here) but in Tokyo I had to restrain myself. This place was in the basement of a subway station and it was very busy. We were lucky to be seated directly to the right of one of the sushi chefs, so we would just grab one of whatever he put up on the belt. I ordered a few pieces from the menu too, but had to repeat myself because of my bad accent. The sushi chefs were kind about it though, and willing to help. If you go and aren’t confident in your Japanese, I recommend pointing to what you want on the menu (after saying your “sumimasen”) or just taking what’s on the belt. It’s all delicious anyway. 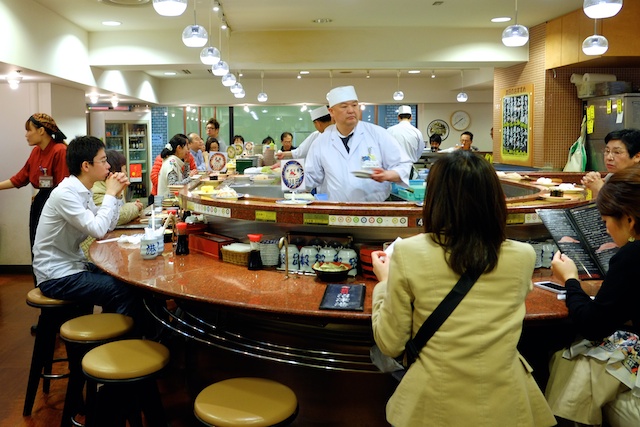 That’s some tuna, somewhere between toro and chutoro – not the fattiest but not the leanest. It was lovely. 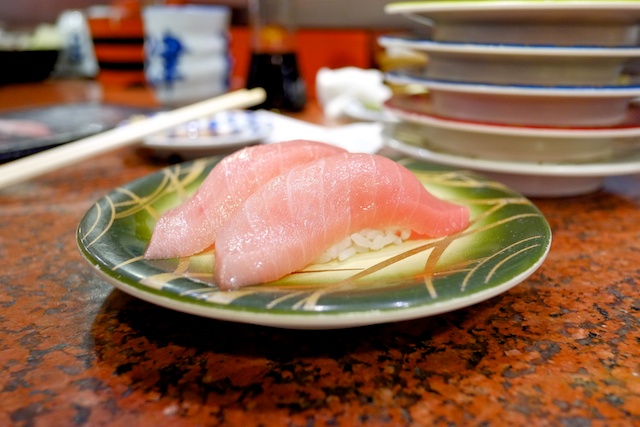 We did lots of shopping in Shibuya while we were there, and crossed the famous crosswalk many times. It’s a lot easier than most crosswalks in New York somehow. 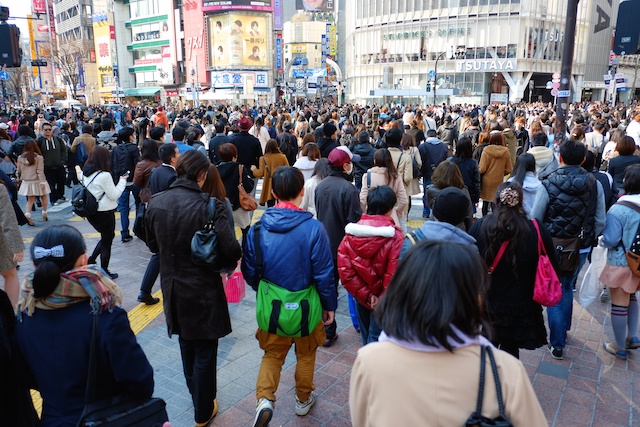 And walking around Shinjuku at sunset. Going through these photos makes me want to go back sooo bad! 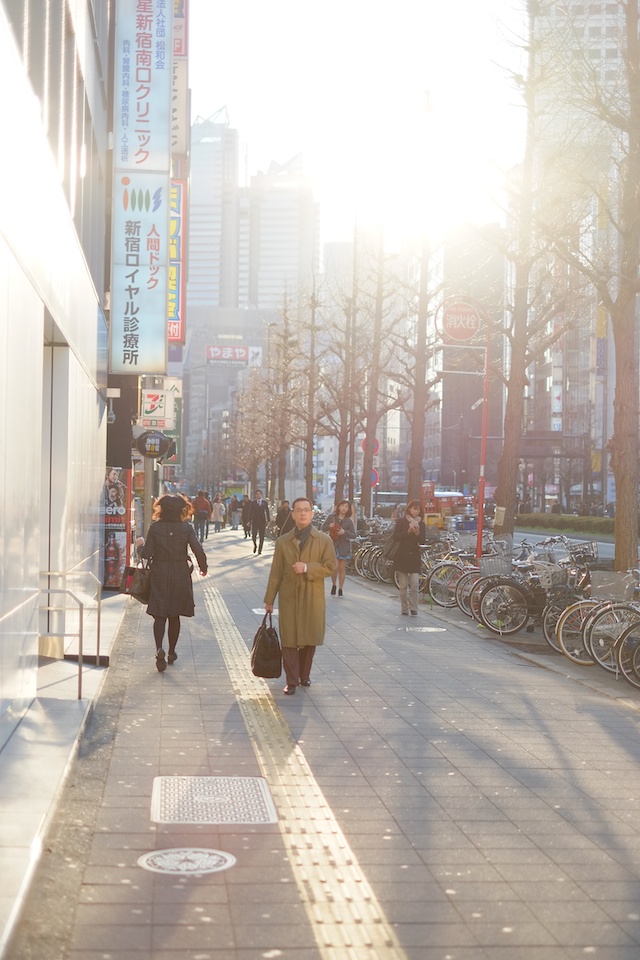 If anyone wants specific info about the Airbnb host we used or how to get around, don’t hesitate to comment or send me an email. To those of you planning trips there, take me with you!