I’m a bit of a meal planning evangelist. For me, it’s just too easy to waste food and money and fall into ruts if I don’t plan things out. And it probably makes me a freak, but figuring out a plan based on what I’ve got that needs using, what my budget is, and what I’m craving is like the best kind of puzzle to me. 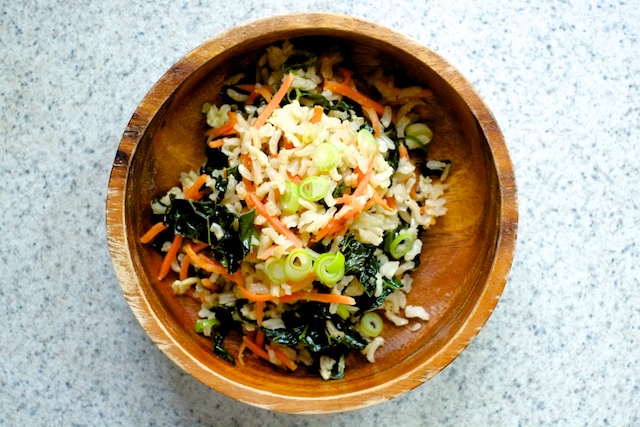 I like doing my shopping on Fridays, because it helps to have fresh ideas and a well stocked fridge before the weekend hits if we don’t want to end up ordering pizza and eating sad scraps around the house. This week I had some left over pork shoulder from two weeks ago that I’d frozen, a few pints of homemade chicken stock, and a couple of tuna steaks. I was also interested in keeping things pretty simple. My plan ended up like this:

Saturday: I made the congee Friday night and we had some left overs for lunch. Congee is basically rice cooked to death (smooth, silky, delicious death) in too much water or broth, until it makes kind of a soupy, savory porridge. I used this recipe and my homemade broth. It was my first time making congee and it was pretty great. I saved the fat from my pork shoulder and used it to cook my mushrooms, which were also awesome. Friday night we had the congee with pork shoulder, Saturday we had it with soft boiled egg. I’ll definitely make it again. At dinner time I was feeling exceptionally lazy and we ordered pizza. I planned and it happened anyway. Plus we just wanted it.

Sunday: Was pretty shameful. I ate leftover pizza for breakfast and experimented with frying potatoes in the afternoon. Caaaarbs all day long. I don’t even remember dinner.

Monday: Cody’s and my anniversary, so we had dinner out at Ray’s the Steaks. I tried this cut I’d never had before that was basically just the outside portion of a ribeye (the BEST part) and it was everything. I love that restaurant.

Tuesday: I made black bean tacos from smitten kitchen’s recipe (with my own twists of course) but Cody worked unexpectedly late and the tacos refused to stay crisp in the oven. Tasty, just not super crisp. The slaw was great though – absolute must.

Wednesday: This meal was just a lazy way to use up the last of my pork shoulder. I had only attempted mashed cauliflower once before and it turned out way too watery, so I decided to roast it this time instead of boiling it. After roasting, the cauliflower didn’t want to mash so I busted out the immersion blender and it was perfect. Mushrooms and asparagus were roasted and lovely.

Thursday: The garlic fried brown rice with kale was pretty good, and I might work up a version for the blog after I get it perfect. The tuna was just meh – working from frozen kind of ruins the texture for “proper” seared and rare tuna, so I had to cook it further which changes the flavor in a way I don’t love. Lesson learned – if you want seared tuna buy it super fresh and probably cook it right away.

Friday: I poached my tuna on Thursday because it takes almost no effort and they come in packs of two and I only used one for the seared tuna. Poaching is easier than re-packaging raw tuna. Just put the fish in a small dish, cover it with olive oil, throw in a couple of whole garlic cloves and a thyme sprig and pop it in a low oven until it’s cooked through. I kept this in it’s oil for overnight storage and re-heated it briefly in the oven. The flavor was excellent – tuna can really stand up to the strong flavors of garlic and thyme. I boiled potatoes and blanched some peas to go with and stirred up some sauce with fresh dill, dijon, sour cream and mayo. Yum.

Overall a decent week in my opinion, with a few learning moments. Should I post my shopping list next time? Or would that just be ridiculous?