Publishing a blog post about Thanksgiving when we’re already halfway to Christmas isn’t the kind of thing a good blogger would do. But those of you who know me also know that I’m not exactly breaking character here.

Anyway, the idea to prepare a Thanksgiving dinner for the NASA people out here in Japan came to me as a reckless whim while I was sitting in the hotel dining room about a week and a half before the holiday. I started thinking hypothetical logistics, fully aware that the whole idea was ill-advised. I was just daydreaming. But then, in a serendipitous moment Suja, our Japanese translator and general fixer, walked into the dining room. Before I could stop myself, the words tumbled out of my mouth: “can I make Thanksgiving dinner for everyone?” I was thinking I could casually throw together a couple of nostalgic dishes for the 30-some people I’d met who’d be missing their families. Suja liked the idea, but had a better grasp of the scope of the project than I did. She said there’d probably be 100 people who would want to come, no way would we be able to find turkeys on the island (Japanese people generally find them dry and I generally agree), and the kitchen at the Sun Pearl has no oven. Did I still want to do it? Yep. And that was it. 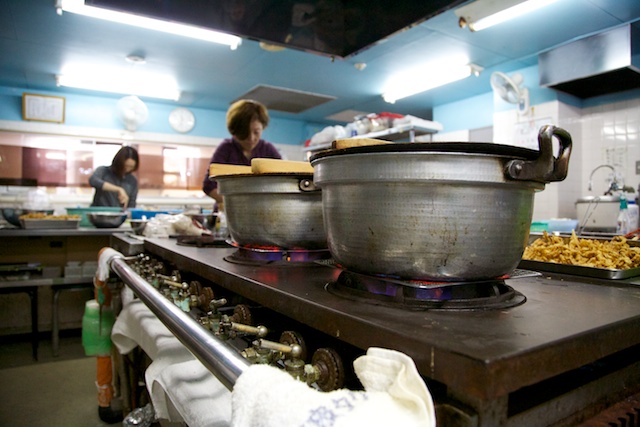 But word started getting around that someone was planning a Thanksgiving without turkeys. We thought Korean barbecue would be a tasty alternative – but the general consensus among the NASA folk was that it just wouldn’t be Thanksgiving without turkeys. Our friend, and Cody’s colleague, Lou took it upon himself to do some late-night networking at the karaoke bars in town and came back to us with news: he’d found a guy, who knew a guy, who could get us turkeys, and he’d get them cooked and delivered, with gravy no less. We were all channeling Goodfellas in this turkey acquisition and it felt sort of illicit. 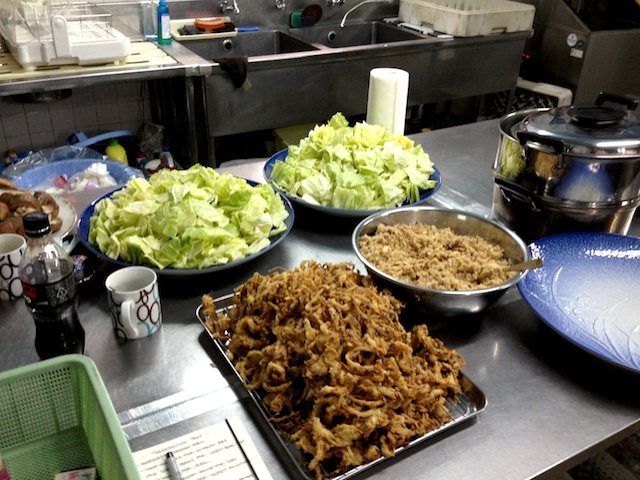 Two other items we had a tricky time finding were green beans and white potatoes. We ended up paying about five dollars a pound for the white potatoes (they’re out of season here) which we had to order from a farmer through Mama-san. Once we figured out the Japanese name for green beans “ingemame” (roughly translated to mean English beans) we were able to get our paws on some of those too.

The last puzzle was dessert. Remember how I had no access to ovens? I asked Midori-san if she knew of any bakeries that made apple pies or pumpkin pies and she said she didn’t. So she took it upon herself to enlist her adorable friend Tomomi-san to make us some gorgeous and delicious apple tarts, which were a perfect substitute. 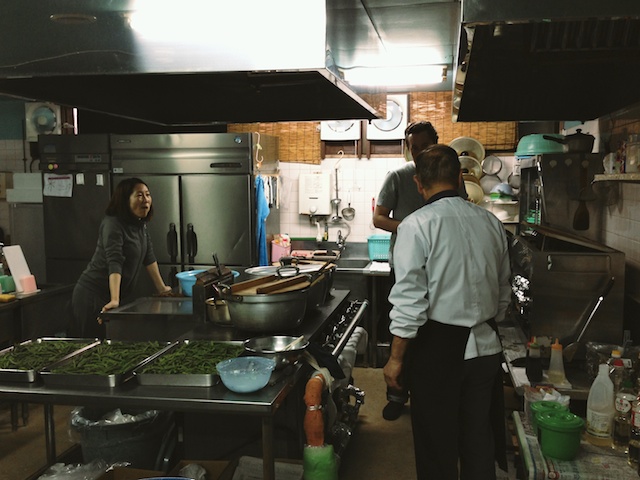 The night before our party, Cody and I got back from dinner and went to the dining room to do some prep, where we found Mama-san sitting stringing a huge pile of ingemame for our meal. I made a fuss and told her to stop, but she wouldn’t, so I joined her. Cody and I had a nice little moment (I should say a nice couple of hours) working with Mama-san and Midori-san and Seki-san to string beans, skin onions, stem mushrooms, and peel potatoes. When I told them to go to bed and let me do the work they refused and said, simply “we like to help people”.

The day of went amazingly well. Cody, Suja, Seki-san and I went into the kitchens at 10am and took things over. After about an hour, the kitchen’s head cook showed up and started sneaking around watching us make idiots of ourselves with their foreign equipment. He had a little smirk on his face as he observed and nudged us in the right direction when we started looking lost. He saw me dumping frying oil into a pot and said “no no no” and uncovered a deep-fryer I’d missed somehow. He was like a little genie/kitchen ninja who just quietly let us go about our business, but swooped in with solutions when we got confused. 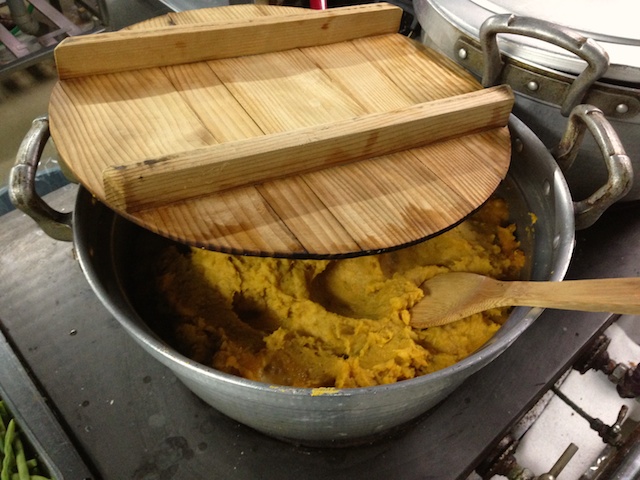 Sweet potatoes are luckily one of Tanegashima’s primary crops, so we had plenty. 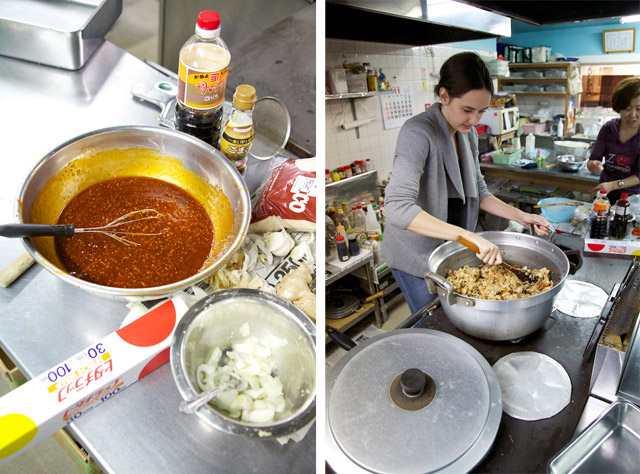 That’s Suja’s angry-looking Korean barbecue marinade on the left. Good stuff – much tamer than it looks. And don’t worry, I’m never doing my hair like that again. I was going for a low, maybe slightly mussed chignon, but clearly it went all Hester Prynne. I just love being in photos. 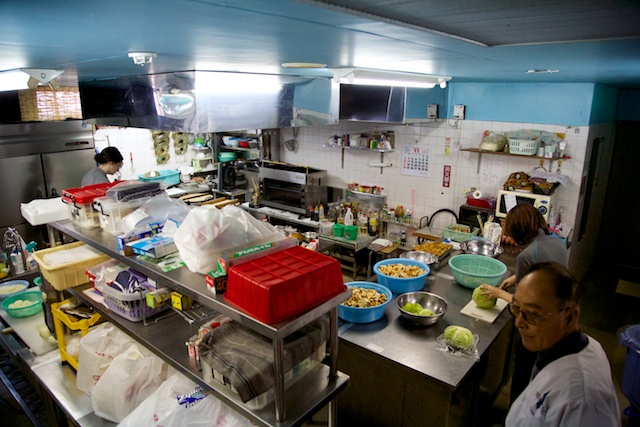 So the guy we’d put our faith in to source, cook, and deliver turkeys came through. The four pretty birds came to us from Australia, via Tokyo, and were cooked impressively well by two separate local restaurants that each had just enough oven space for two turkeys. OH and gravy. 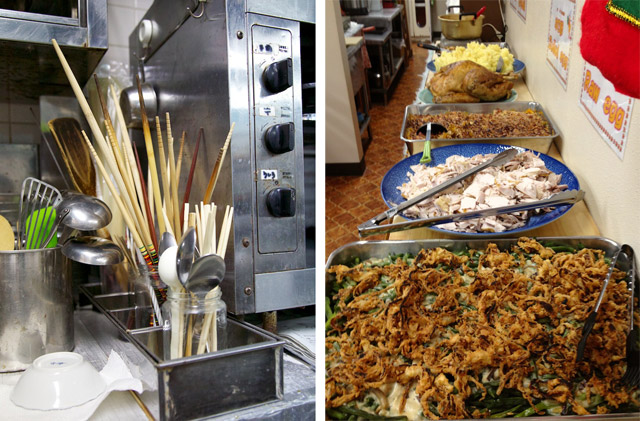 Successes of the night: the Japanese people really liked the Turkey, and while the Americans were obsessed with the crunchy almond and cashew brulee’d sweet potato situation I came up with, I saw several piles of untouched sweet potatoes come back on Japanese plates. Different palates, you know? The only real fail of the night: we ran out of gravy. 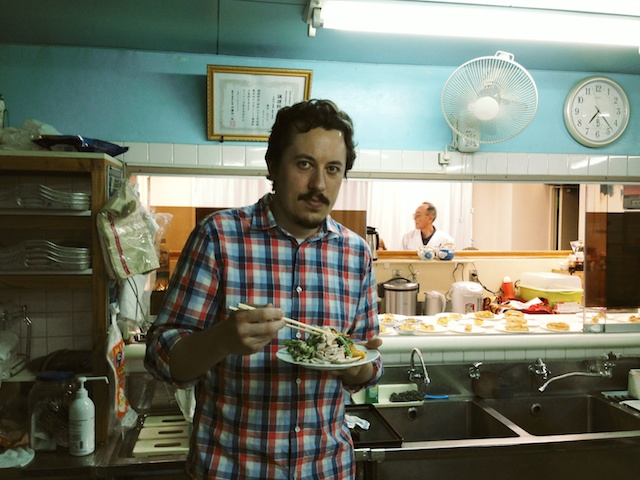 Cody was such a champ, along with Seki-san and Suja, the NASA folks that washed dishes and served food, and our personal kitchen ninja whose name I still don’t know (Suja asked and he said just call me “brother” in Japanese, which is sort of deceptively vague if you ask me – typical ninja behavior). We worked all day and ate our dinner standing up, between cleaning and serving food, and I had such an inordinate amount of fun I think I missed my calling as a caterer.